The Silver Waterfall: How America Won the War in the Pacific at Midway (Compact Disc) 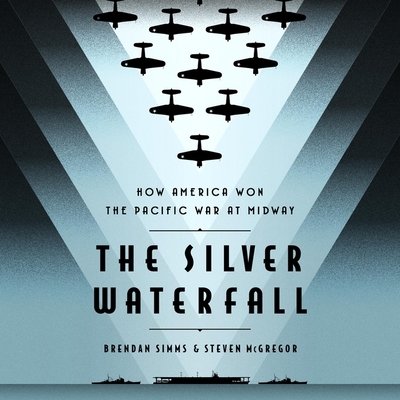 A vivid new history of the Battle of Midway that transforms our understanding of the iconic turning point of the Second World War. The stunning and decisive battle of Midway was perhaps the most crucial naval battle in the Pacific theater during World War II. Walter Lord explained away the US victory at Midway against a numerically superior and apparently more skilled Japanese fleet due to 'Lady Luck.' In The Silver Waterfall acclaimed historian Brendan Simms and historian and military veteran Steve McGregor show it was no such thing. Luck had little to do with it.Instead the authors show how the forces of industrial dynamism and innovation were central to the US being able to win the war in the Pacific. Engineers, machinists, test pilots, and a willingness to experiment at scale were vital to the creation of the decisive element that would sink the hopes of Japan along with the pride of their aircraft carrier fleet: the Douglas Dauntless Dive Bomber dive bomber, whose vicious near vertical plummet from the sky to deliver a brutally accurate attack was the silver waterfall that the Japanese quickly came to dread. In a few deadly minutes they changed the course of the war in the Pacific.Equally important, the Navy drew on the skills of a wide variety of immigrants or descendants of immigrants--especially those from Germany, the principal hostile power. The engineer who designed the plane which decided the Battle of Midway was Ed Heinemann, the strategist who decided America would defend Midway Island was Chester Nimitz; and the pilot who symbolized American performance on the day was Dusty Kleiss. Without these men, America could not have designed, planned, or done what was needed to win. The Silver Waterfall offers a revelatory new history of Midway, showing that if the Americans were lucky, they made their own luck.

This feature require that you enable JavaScript in your browser.
END_OF_DOCUMENT_TOKEN_TO_BE_REPLACED

This feature require that you enable JavaScript in your browser.
END_OF_DOCUMENT_TOKEN_TO_BE_REPLACED

This feature require that you enable JavaScript in your browser.
END_OF_DOCUMENT_TOKEN_TO_BE_REPLACED