A Week on the Concord and Merrimack Rivers: Novel (1849) (Paperback) 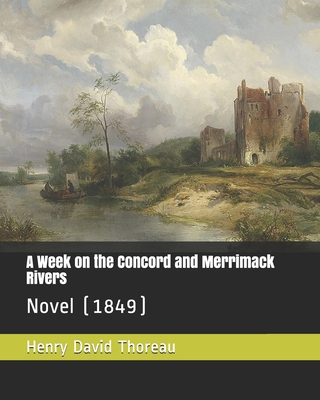 A Week on the Concord and Merrimack Rivers (1849) is a book by Henry David Thoreau (1817-1862). It is ostensibly the narrative of a boat trip from Concord, Massachusetts to Concord, New Hampshire, and back, that Thoreau took with his brother John in 1839. John died of tetanus in 1842 and Thoreau wrote the book, in part, as a tribute to his memory.BackgroundThe book's first draft was completed while Thoreau was living at Walden Pond (1845-47). He was unable to find a publisher, however, and therefore had it published at his own expense. Few copies sold and he was left with several hundred extras and went into debt. A slightly revised version of A Week, based on corrections Thoreau had made himself, was published in 1868, six years after his death. ..............Henry David Thoreau (see name pronunciation; July 12, 1817 - May 6, 1862) was an American essayist, poet, and philosopher. A leading transcendentalist, Thoreau is best known for his book Walden, a reflection upon simple living in natural surroundings, and his essay "Civil Disobedience" (originally published as "Resistance to Civil Government"), an argument for disobedience to an unjust state.Thoreau's books, articles, essays, journals, and poetry amount to more than 20 volumes. Among his lasting contributions are his writings on natural history and philosophy, in which he anticipated the methods and findings of ecology and environmental history, two sources of modern-day environmentalism. His literary style interweaves close observation of nature, personal experience, pointed rhetoric, symbolic meanings, and historical lore, while displaying a poetic sensibility, philosophical austerity, and Yankee attention to practical detail. He was also deeply interested in the idea of survival in the face of hostile elements, historical change, and natural decay; at the same time he advocated abandoning waste and illusion in order to discover life's true essential needs.He was a lifelong abolitionist, delivering lectures that attacked the Fugitive Slave Law while praising the writings of Wendell Phillips and defending the abolitionist John Brown. Thoreau's philosophy of civil disobedience later influenced the political thoughts and actions of such notable figures as Leo Tolstoy, Mahatma Gandhi, and Martin Luther King Jr.Thoreau is sometimes referred to as an anarchist. Though "Civil Disobedience" seems to call for improving rather than abolishing government-"I ask for, not at once no government, but at once a better government"-the direction of this improvement contrarily points toward anarchism: "'That government is best which governs not at all;' and when men are prepared for it, that will be the kind of government which they will have.

This feature require that you enable JavaScript in your browser.
END_OF_DOCUMENT_TOKEN_TO_BE_REPLACED

This feature require that you enable JavaScript in your browser.
END_OF_DOCUMENT_TOKEN_TO_BE_REPLACED

This feature require that you enable JavaScript in your browser.
END_OF_DOCUMENT_TOKEN_TO_BE_REPLACED