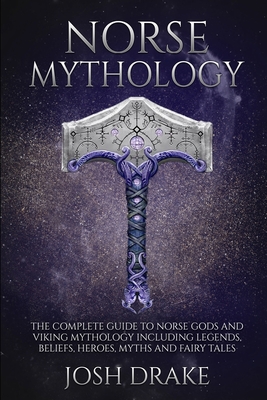 This is book number 1 in the Mythology series.

A mesmerizing tale revolving around the mysterious and profound Norse folklore and the beguiling lifestyle of the legendary Vikings. This book has connected all the pieces of the puzzle and presents a unique tapestry interwoven with multiple threads from the different sides of Norse mythology that contains all the answers about the legendary Vikings and their beliefs.

In contrast to the common misconception about the Vikings that they were ruthless agnostics and brutes and not much more than that, the book provides valuable insight into the polytheistic religion of the Vikings and gives an in-depth knowledge about their culture - whether they did have a culture at all, and whether they were the brutes that most accounts of their existence and activities say they were?

Find out the truth about the Vikings and how they are actually portrayed by the Norse folklore. Why they moved out of their country and how they conducted raids across the globe and conquered areas?

This book covers everything from the Norse Gods to the sumptuous heaven perceived by the Norse mythology and religion as the place where the most honorable warriors live - the magnificent Valhalla.

In Norse mythology, there is a unique approach towards all the heavenly and godly creations as well as phenomena. The dividing line in the day and night, as well as the changing shades of weather, are described. The origin of every object and every phenomenon in the world has a fanciful tale attached to it in the unique and mysterious Norse mythology that the Scandian people believed in, centuries ago. To make a long story short, this book holds in it a beguiling and thrilling tale of the beliefs of an enchanting and historic population written in a piquing manner.

This feature require that you enable JavaScript in your browser.
END_OF_DOCUMENT_TOKEN_TO_BE_REPLACED

This feature require that you enable JavaScript in your browser.
END_OF_DOCUMENT_TOKEN_TO_BE_REPLACED

This feature require that you enable JavaScript in your browser.
END_OF_DOCUMENT_TOKEN_TO_BE_REPLACED