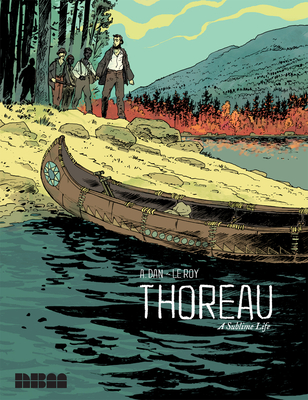 “To be a philosopher is not merely to have subtle thoughts, nor even to found a school, but so to love wisdom as to live according to its dictates, a life of simplicity, independence, magnanimity and trust.” This graphic novel biography relates the forward looking inspirational life of the great author, philosopher and pioneering ecologist. Henry David Thoreau was also the father of the concept, still fresh today (viz "Occupy Wall St."), of "civil disobedience" which he used against slavery and the encroachment of government.

A. Dan was born in Toulouse, France in 1970. After long studies in Biology, his desire to draw catches up with him, leading to his other love, comics. He has published a number of literary graphic novels. Born in 1985, Maximilien Le Roy has written a number of non-fiction graphic novels such as Gaza, A Paving Stone in the Sea, and a biography of Nietzsche, besides various acclaimed works of fiction in comics.

"Beautifully captures the essence of its subject and the wild times in early America that formed his philosophy. Dan and Le Roy breathe life into this remarkable retelling." —Richard Pachter, Miami Herald

"Dan and Le Roy restore a luminous fire to one of America’s most stirring writers of conscience." —Publishers Weekly

"Perfectly captures the essence of one of our greatest thinkers. I have read more than my fair share of biographical works presented in comic book or graphic novel form over the years, but this slim volume is the most effective argument for the power of the medium in telling the story of a person's life." —William Kulesa, nj.com

"This lovely book breathes new life into Thoreau and returns to him his true depth, which has been overlooked in recent impressions. A worthy addition to any library that includes Thoreau’s works." —Eric Norton, Library Journal

"A necessary and valuable addition to the literature about Thoreau." —Foreword Reviews

"This graphic novel offers modern readers a view of what human rights activism and radical thought looked like approximately 150 years ago. This complimentary but thoughtful take on the life of Henry David Thoreau begins with the construction of his famous cabin by Walden Pond and ends with his death. His deep appreciation for nature is reflected in the autumnal and late-summer color palettes of the striking illustrations. Additional details are unveiled through short excerpts of his writing paired with his conversations, wherein he discusses the many religious texts and philosophers that have inspired his simplistic, moralistic lifestyle. A middle grade reader could engage in a shallow reading of this text, but a lack of direct historical context makes it best for older and/or high-level readers. The essay at the story’s conclusion provides readers with a slightly less rosy vision of him than was presented in the story. This title is best for high school libraries with strong literary curriculum or whose students have interest in classic authors."—Alexandra Quay, School Library Connection