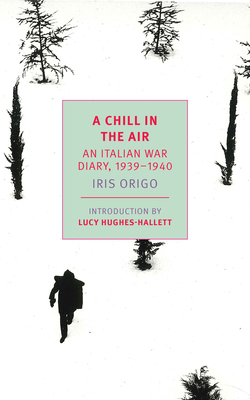 A harrowing account of life in Italy in the year leading up to World War II, available in the US for the first time.

In 1939 it was not a foregone conclusion that Mussolini would enter World War II on the side of Hitler. In this  previously unpublished and only recently discovered diary, Iris Origo, author of the classic War in Val d’Orcia, provides a vivid account of how Mussolini decided on a course of action that would devastate his country and ultimately destroy his regime.

Though the British-born Origo lived with her Italian husband on an estate in a remote part of Tuscany, she was supremely well-connected and regularly in touch with intellectual and diplomatic circles in Rome, where her godfather, William Phillips, was the American ambassador. Her diary describes the Fascist government’s growing infatuation with Nazi Germany as Hitler’s armies marched triumphantly across Europe and the campaign of propaganda and intimidation that was mounted in support of its new aims. The book ends with the birth of Origo’s daughter and Origo’s decision to go to Rome to work with prisoners of war at the Italian Red Cross.

Together with War in Val d’Orcia, A Chill in the Air oﬀers an indispensable record of Italy at war as well as a thrilling story of a formidable woman’s transformation from observer to actor at a great historical turning point.

Iris Origo (1902–1988) was a British-born biographer and writer. She lived in Italy and devoted much of her life to the improvement of the Tuscan estate at La Foce, which she purchased with her husband in the 1920s. During the Second World War, she sheltered refugee children and assisted many escaped Allied prisoners of war and partisans in defiance of Italy’s fascist regime and Nazi occupation forces. She is the author of Images and Shadows; A Chill in the Air: An Italian War Diary, 1939–1940; Leopardi: A Study in Solitude; and The Merchant of Prato, among others.

Lucy Hughes-Hallett is a prizewinning historian and novelist. Her nonfiction book The Pike: Gabriele D’Annunzio was the winner of the Samuel Johnson Prize, the Duff Cooper Prize, and the Costa Biography Award. She lives in London and Suffolk.

Katia Lysy was born in Rome. She has worked for Italian television RAI 3, in publishing, as a journalist and as a literary translator from English and French into Italian. She now lives between Rome and Val d’Orcia, in southern Tuscany, where she assists her mother Benedetta, daughter of the writer Iris Origo, in the management and development of the family estate of La Foce, whose historic gardens are visited by Iris Origo readers from all over the world.

"It’s almost impossible to imagine a better time to read A Chill in the Air: An Italian War Diary, 1939–1940...Trenchant, intelligent, and written with a cool head...it can be read not only as a historical document but as an urgent message, a stealth paper airplane sent to us from a shadowed past...One of the vital interests of the diary is watching the alert, perspicacious mind of a supremely intelligent person coming alive to the situation around her." —Cynthia Zarin, The New Yorker

"One of the great values of this brief but highly readable earlier diary is that it was written when the direction of history—whether there would be a war and how it would turn out—was far less clear." –Alexander Stille, The New York Times Book Review

“A gripping insight into the period leading up to the summer of 1940, when Mussolini aligned with Hitler against the Allies...[Origo] kept this diary as a record of what she learnt from gossip, hearsay, newspaper reports and the foreign radio broadcasts she tuned into, in an attempt to cut through the propaganda and piece together the true global picture.” —The Telegraph

"A reminder of what an intelligent, scholarly and perceptive writer Origo was, and of the deep affection she felt for her adopted country. She had no illusions about its shortcomings, but she understood them in a way few foreigners ever have done." —Caroline Moorehead, The Times Literary Supplement

“What Iris Origo captures here, poignantly and with great clarity, is the silence that falls when peacetime debate is replaced by the brute simplicity of armed combat.” —Lucy Hughes-Hallett

“A Chill in the Air proves Origo a strikingly attentive and perceptive chronicler of ordinary people and everyday life during extraordinary times.” —The National (UK)

“Origo’s compelling and illuminating journal is a potent blend of sifted news reports, collected rumours and collated views. In and around this, Origo sprinkles her own shrewd reflections, keen-eyed observations and ever-increasing doubts.” —The Herald (UK)

“This volume, a worthy counterpart to War in the Val d’Orcia, focuses on Mussolini’s fatal miscalculation that, heedless of the dangers for Italy, he could side with Hitler to extract maximum profit from a German victory. Origo decided in March 1939 to keep the diary to help her remain ‘steady’ as the government of her adopted homeland became increasingly hostile to her two countries of origin.” —The Guardian

This feature require that you enable JavaScript in your browser.
END_OF_DOCUMENT_TOKEN_TO_BE_REPLACED

This feature require that you enable JavaScript in your browser.
END_OF_DOCUMENT_TOKEN_TO_BE_REPLACED

This feature require that you enable JavaScript in your browser.
END_OF_DOCUMENT_TOKEN_TO_BE_REPLACED