The True History of the First Mrs. Meredith and Other Lesser Lives (Paperback) 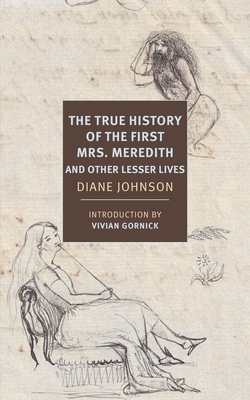 A classic of alternative biography and feminist writing, this empathetic and witty book gives due to a "lesser" figure of history, Mary Ellen Peacock Meredith, who was brilliant, unconventional, and at odds with the constraints of Victorian life.

“Many people have described the Famous Writer presiding at his dinner table. . . . He is famous; everybody remembers his remarks. . . . We forget that there were other family members at the table—a quiet person, now muffled by time, shadowy, whose heart pounded with love, perhaps, or rage.” So begins The True History of the First Mrs. Meredith and Other Lesser Lives, an uncommon biography devoted to one of those “lesser lives.” As the author points out, “A lesser life does not seem lesser to the person who leads one.” Such sympathy and curiosity compelled Diane Johnson to research Mary Ellen Peacock Meredith (1821–1861), the daughter of the famous artist Thomas Love Peacock (1785–1866) and first wife of the equally famous poet George Meredith (1828–1909). Her life, treated perfunctorily and prudishly in biographies of Peacock or Meredith, is here exquisitely and unhurriedly given its due. What emerges is the portrait of a brilliant, well-educated woman, raised unconventionally by her father only to feel more forcefully the constraints of the Victorian era. First published in 1972, Lesser Lives has been a key text for feminists and biographers alike, a book that reimagined what biography might be, both in terms of subject and style. Biographies of other “lesser” lives have since followed in its footsteps, but few have the wit, elegance, and empathy of Johnson’s seminal work.

Diane Johnson is a novelist and critic. She is the author of Lulu in Marrakech and Le Divorce, among other novels, and of a memoir, Flyover Lives. She lives in Paris and San Francisco.

Vivian Gornick is a Manhattan essayist, memoirist, and critic. She is the author of some twelve books written in all of these genres. Her newest book (fortuitously) is Unfinished Business: Notes of a Chronic Re-reader.

“Johnson deftly spins the little that is definitively known about the life of Mary Ellen into a refractive portrait of a spirited, restless individual. But—like Phyllis Rose’s better-known multiple Victorian biography, ‘Parallel Lives,’ with which Johnson’s book shares a feminist sensibility and a bracingly subjective point of view—the book’s subject is also a consideration of the very project of biography, often elaborated in elegantly argued footnotes.” —Rebecca Mead, The New Yorker

“First published in 1972, the book passed into obscurity and has been happily reissued . . . fresh as ever—a seething, stylish reclamation of a forgotten life.” —Parul Sehgal, The New York Times

“Taking cue from Woolf's call, in A Room of One's Own, for women to write their forebears back into the record, Johnson's lively and intimate portrait offer a sly challenge of the assumption that, as Thomas Carlyle put it, 'the history of the world is but the biography of great men.' . . . There is no better advocate for biography's vitality as a creative art than Johnson's sensitive, profound and highly entertaining tapestry, no less resonant now than at its first publication.” — Francesca Wade, Times Literary Supplement

“In encouraging us to give ourselves over to conjecture, [Johnson] asks us to redistribute the attention that would ordinarily funnel toward the person thought to be most important. It is exciting to read this way: We feel we are helping Johnson build a richer and more populous world than has been rendered before. . . . Lesser Lives is a corrective, resurfacing during a time when there is a greater demand for women’s stories in literature, particularly when there is the sense that a man’s story has won out over hers.” —Marie Solis, The Nation

“She [Johnson] gives us a stirring tale of a headstrong girl, brought up under the old license of the 18th century but obliged to knuckle down to the stern realities of the new Victorian age.” —Kathryn Hughes, The Guardian

"The fiercely partisan reading of Mary Ellen has struck a chord. Many a 'true history' deals with a fictional character, and indeed Johnson's Mary Ellen is partly her own creation, a nineteenth-century woman seen through twentieth-century eyes, Her biography vibrates with symptahy for her, and for the other women around her who had such limited control over their fates."—Jacqueline Banerjee, Victorian Web

“This wonderful, ground-breaking biography looks not only at a Famous Victorian Writer, but at many of the even more interesting and sometimes much more likable people whose lives touched his. A real treat—even the notes are fun to read and often surprising.” —Alison Lurie

“This book, which I first knew decades ago under the title Lesser Lives, had an enormous impact on my thinking and career. The title alone projected so strongly the then-radical idea that there is always someone else in the room with the Famous Person who feels as intensely as the Famous Person but whose story is ignored. We learned from it that telling someone’s story was a political act. A wave of superb feminist books was based on this insight which then entered the mainstream and can be seen in ways as diverse as the New York Times’s ‘Ignored No More’ column and in Hamilton, when the Schuyler sisters wonder in song who will tell their story. Re-reading Diane Johnson’s masterpiece now, I appreciate more than ever its wit and generosity—the sheer delight to be found in the prose. In Diane Johnson’s hands, Mary Ellen Peacock turns out to be much more fun to read about than her Famous Husband.” —Phyllis Rose

“A clever little book. . . a poignant needling, deflating the male creative genius—not ungenerously—and providing yet another plausible case of a wife abused by posterity. . . . With a nose for the pastness and otherness of the past, equal parts sour wit and quick sympathy, [Johnson] is just the right match for what’s odd and sad in her Victorian story.” —Tessa Hadley, London Review of Books

This feature require that you enable JavaScript in your browser.
END_OF_DOCUMENT_TOKEN_TO_BE_REPLACED

This feature require that you enable JavaScript in your browser.
END_OF_DOCUMENT_TOKEN_TO_BE_REPLACED

This feature require that you enable JavaScript in your browser.
END_OF_DOCUMENT_TOKEN_TO_BE_REPLACED