Germs: A Memoir of Childhood (Paperback) 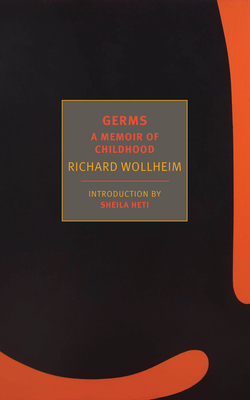 A brilliant, sinuous exploration of family and childhood memory by one of the most original British philosophers of the twentieth century.

Germs is about first things, the seeds from which a life grows, as well as about the illnesses it incurs, the damage it sustains. Written at the end of his life by Richard Wollheim, one of the major philosophers of the late twentieth century, the book is not the usual story of growing up and getting on but a brilliant recovery and evocation of childhood consciousness and unconsciousness, an eerily precise rendering of that primitive, formative world we all come from in which we do not know either the world or ourselves for sure, and things—houses, clothes, meals, parents—loom large around us, as indispensable as they are out of our control. Richard Wollheim’s remarkably original memoir is a disturbing, enthralling, dispassionate but also deeply personal depiction of a child standing, fascinated and fearful, on the threshold of individual life.

Richard Wollheim (1923–2003) was born in London and educated at Westminster School and Balliol College, Oxford. He fought in France and Germany during World War II and taught philosophy at numerous colleges, including the University of California, Berkeley from 1985 until his death in 2003. He was best known for his philosophical work on art and psychoanalysis, and he served as president of the British Society of Aesthetics from 1992 until his death. He wrote and edited over a dozen books, including On the Emotions, The Mind and Its Depths, On Art and the Mind, and Painting as an Art.

Sheila Heti is the author of eight books of fiction and nonfiction, including the novels Ticknor, Motherhood, and How Should a Person Be?, and the story collection, The Middle Stories. She lives in Toronto.

“A great book, strange and beautifully written, candid yet ornate, as if Rousseau were being rewritten by Proust, with interpolations by another author familiar with Beckett. Wollheim’s spoilt childhood—eccentric parents, important visitors (Diaghilev, Kurt Weill, Serge Lifar), grand houses and grand hotels—was lonely and sad and strange enough, but immensely more interesting than most. . . . This is not a book to be admired for a season or a year, but to be counted among those masterpieces of which the fading memory continually demands return and refreshment.” —Frank Kermode

“In Wollheim’s hands the sentence—often half a page long, full of sinuous purpose and subtle qualification—takes on extraordinary interest as he searches for the precise colour and purport of a childhood memory. The effect is of intellectual exactness given expression as a work of art. For all the book’s rigour it is its poetry—the play of charged imagery, the sense of something impalpable that outlasts analysis—that one most remembers.” —Alan Hollinghurst, The Guardian

“Germs is written with extraordinary elegance. Wollheim seems incapable of writing a bad sentence. . . . There is nothing quite like this poignant and mournful memoir. It is remarkable as a kind of sensory autobiography and as that rarest of memoirs, where one has the sense that one is in direct, intimate and occasionally frightening contact with the mind of a child.” —Michael J. Lewis, The Wall Street Journal

“Wollheim is tireless at finding fresh aspects to an experience he is describing. Just when you think he has shown you every last facet of some childhood episode, up he comes with more.” —Los Angeles Times

“Wollheim’s powers of description astound. Topographically or architecturally, no one has ever depicted London’s more prosperous suburbs with such exactitude. His prose is the verbal equivalent to Pre-Raphaelite painting, crowded with lovingly observed and richly colored detail . . . I doubt anyone who has read it will forget it.” —Literary Review

"The intensity, delicacy and precision of the act of memory in Germs have provoked comparisons with Proust. Just comparison perhaps, but this is a Proust who can also make you laugh out loud. . . . In this fine memoir, Richard Wollheim has transmuted his childhood hurt and loneliness into an artful, precise, self-deprecating detachment." —The Irish Times

“[A] radiant masterpiece. . . [Germs] is by turns exquisite, appalling, mysterious, and very, very funny. . . . Brought this close up to what it feels like to be a child, or for that matter an adult, Wollheim helps us see with awful clarity what an emotional and moral predicament it is to be alive. . . . [He] is one of those supreme observers who we feel is presenting things as they actually were and not as they emerge from the alembic of memory.” —John Banville, The Nation

This feature require that you enable JavaScript in your browser.
END_OF_DOCUMENT_TOKEN_TO_BE_REPLACED

This feature require that you enable JavaScript in your browser.
END_OF_DOCUMENT_TOKEN_TO_BE_REPLACED

This feature require that you enable JavaScript in your browser.
END_OF_DOCUMENT_TOKEN_TO_BE_REPLACED