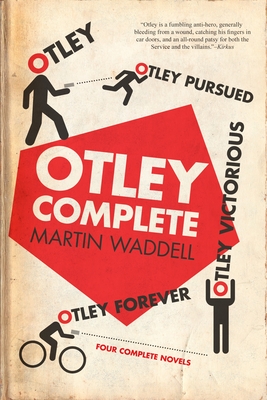 Critically acclaimed on their original publication and adapted to the big screen, these four near-parodies of the British spy novel feature the caddish anti-hero Gerald Otley, who finds himself uprooted from his life as common conman and dropped into the role of super spy.

It starts as it always does for Gerald Otley, a petty theft gone wrong. But when the bodies of associates (Otley doesn't really have friends) start turning up dead, he suddenly finds himself caught in a much larger web than he imagined. Recruited by the alluring and enigmatic "Grace" and blackmailed into service, Otley finds himself playing at spy in a realm he only half understands. As readers soon find, it turns out that being a fast-talking conman is all it takes to succeed as a spy--as long as Grace is around to break bones and generally pull you out of the fire.

Martin Waddell (born 10 April 1941) is an Irish writer of children's books. He may be known best for the texts of picture books that feature anthropomorphic animals, especially the Little Bear series, illustrated by Barbara Firth, and Owl Babies, illustrated by Patrick Bensen. He also writes under the pen name Catherine Sefton for older children, primarily ghost stories and mystery fiction. Otley was his debut. After completing the series he never returned to the genre. For his "lasting contribution" as a children's writer Waddell received the Hans Christian Andersen Medal in 2004.

This feature require that you enable JavaScript in your browser.
END_OF_DOCUMENT_TOKEN_TO_BE_REPLACED

This feature require that you enable JavaScript in your browser.
END_OF_DOCUMENT_TOKEN_TO_BE_REPLACED

This feature require that you enable JavaScript in your browser.
END_OF_DOCUMENT_TOKEN_TO_BE_REPLACED