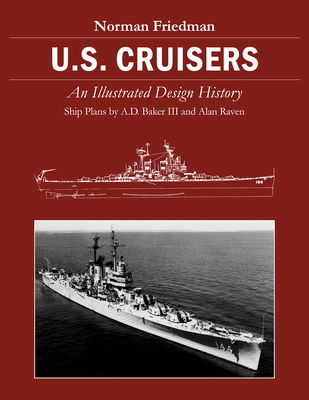 Like other books in Norman Friedman's design-history series, this one pays attention to all designs, even those that never left the drawing board, since every proposal made is a link in the evolution of the cruiser force. Friedman, a recognized authority on U.S. warships, uncovers the reasoning behind the many radical changes in U.S. cruiser design, which culminated in the series of Aegis missile ships. He deals both with evolving technology and with those changes in the doctrine and role of the U.S. Navy that clearly affected cruiser design, Because the nature of the cruiser is somewhat ill defined, his book discusses a wide variety of ships, from the battleship-like armored cruisers of the turn of the century the battle cruisers of 1916 to scout cruisers and the Atlantas, ships that were, in many ways, enlarged destroyers. It covers the emergence of peace cruisers, which were essentially large gunboats, and the post-1945 command and missile cruisers. The World War II Alaska-class large cruisers are also included. Friedman shows how the path from the first steel cruisers to the ultramodern Ticonderogas defines many of the themes of U.S. naval development: the transition from a coastal defense/commerce raiding navy to a navy designed to seize and exploit command of the world's oceans, and from a navy of independent cruisers on foreign stations to a battle fleet navy and then a carrier navy. Arms control is another important theme of this book. Friedman explains how cruiser design, much more that the design of any other category of ship, has been affected by the constraints of naval arms limitation treaties. He uses the Erie-class gunboat, a slow cruiser, and the original Cleveland, an abortive design that stayed within the 8,000-ton limit prescribed by the London Treaty of 1936, as examples of attempts to exploit treaty restrictions. Also carefully examined are the many post-World War II cruiser projects, both those that were built, like the nuclear powered Long Beach, and those that were not, like the specialized command ship of 1968. In every case, the author discusses not merely what was tried, but why it succeeded or failed. A.D. Baker III and Alan Raven have drawn detailed scale outboard and plan views of each cruiser class and of major modifications to many classes. The author has provided inboard profiles and sketches of abortive projects. Numerous photographs complement the text. Appendices include ship characteristics and data on ship careers. U.S. Cruisers is essential reading for those concerned with the future of the U.S. Navy. Naval historians and architects alike will find this the most comprehensive reference available on the subject.

Norman Friedman is one of America's most prominent naval analysts and the author of more than thirty books covering a range of naval subjects. A.D. Baker III is a highly regarded naval authority, known for his work as both an illustrator and a writer. Alan Raven is a British-born naval historian and illustrator.

This feature require that you enable JavaScript in your browser.
END_OF_DOCUMENT_TOKEN_TO_BE_REPLACED

This feature require that you enable JavaScript in your browser.
END_OF_DOCUMENT_TOKEN_TO_BE_REPLACED

This feature require that you enable JavaScript in your browser.
END_OF_DOCUMENT_TOKEN_TO_BE_REPLACED