Tales from the San Francisco 49ers Sideline: A Collection of the Greatest 49ers Stories Ever Told (Hardcover) 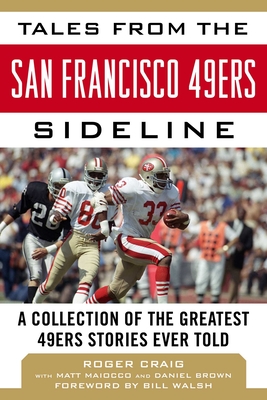 In this revised edition of Tales from the San Francisco 49ers Sideline, Roger Craig capture some of the moments that defined the organization Included are stories about all of the men who shaped NFL history, including Bill Walsh, Joe Montana, Steve Young, Ronnie Lott, Jerry Rice, Jim Harbaugh, and more.

The San Francisco 49ers shaped the NFL throughout the 1980s with their unique blend of precision, panache, and preparation. Three decades later, NFL teams are still copying the system and the methods that made the 49ers unlike any other organization in professional sports.

Now fans of this dynamic franchise will relive all the action and thrills of 49ers football through the eyes of one of the greatest San Francisco legends of all time: Roger Craig.

Star of three of the 49ers Super Bowl wins, Roger Craig was one of the most productive players in franchise history. The first player in NFL history to top 1,000 yards rushing and receiving in the same season, he used his knee-churning, eyes-wide-open style to earn four trips to the Pro Bowl and score a Super Bowl–record three touchdowns in one game.

Fans will relive all the great moments and read some never-before-told stories from a man who kept his eyes open to everything during his fascinating career.

Roger Craig enjoyed an eleven-year career in the NFL, the first eight years of which netted him three Super Bowl championships with the San Francisco 49ers. Born in Davenport, Iowa, he starred at the University of Nebraska and was a second-round draft pick of the 49ers in 1983. After retiring from the NFL he became director of business development for TIBCO Software.

This feature require that you enable JavaScript in your browser.
END_OF_DOCUMENT_TOKEN_TO_BE_REPLACED

This feature require that you enable JavaScript in your browser.
END_OF_DOCUMENT_TOKEN_TO_BE_REPLACED

This feature require that you enable JavaScript in your browser.
END_OF_DOCUMENT_TOKEN_TO_BE_REPLACED