Tales from the Kansas City Chiefs Sideline: A Collection of the Greatest Chiefs Stories Ever Told (Tales from the Team) (Hardcover) 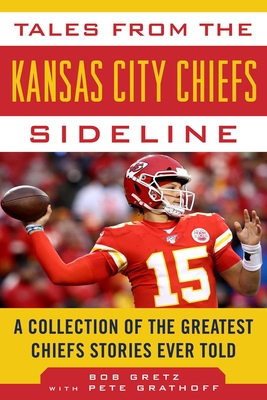 Relive the best stories of Chiefs football—newly updated through the 2019–​2020 season!
Beginning with their founding as the Dallas Texans of the American Football League in 1960, the Kansas City Chiefs have been one of professional football’s most storied franchises. In Tales from the Kansas City Chiefs Sideline, veteran sportswriter Bob Gretz brings the team’s rich history to life.

Gretz begins with the Chiefs’ visionary, 27-year-old owner Lamar Hunt, who founded not only a team but an entire league. After the Texans won the AFL championship in 1962, Hunt moved the team out of his hometown to Kansas City. Two Super Bowl appearances as the representative of the AFL culminated in a Chiefs’ championship in 1970, despite being a double-digit underdog to the Minnesota Vikings. It would be the final game featuring an AFL team, as the Chiefs and nine other teams merged with the NFL. Gretz covers the battles leading up to the merger along with the high and low points in team history—the lean years (1972–88); the “Carl and Marty” era, when the team made the play-offs in six consecutive seasons; the “Joe and Marcus” show of 1993; the dismal 2008 season; and the team’s 2013 renewal under Andy Reid and John Dorsey.

Tales from the Kansas City Chiefs Sideline is a must-have for any Chiefs fan!

Bob Gretz has been writing about the NFL since 1977. In 1981, he began covering the Chiefs for the Kansas City Times and Kansas City Star, and he’s been hanging around Arrowhead Stadium ever since. He spent eighteen years as part of the Chiefs Radio Network game-day broadcasts, and he was the lead columnist on the team’s website, KCChiefs.com, for ten years. For the last several years, he’s operated his own website, BobGretz.com, devoted to the Chiefs and the NFL. His writing has been honored by the Associated Press Sports Editors and the Pro Football Writers of America. He lives in Overland Park, Kansas.

Pete Grathoff has written about the NFL since 1995, and has been covering sports for the Kansas City Star for the past 22 years. That includes coverage of the Kansas City Chiefs over the previous six years. He has been a part of projects honored by the Associated Press Sports Editors. A native of St. Charles, Illinois, he resides in Shawnee, Kansas.

This feature require that you enable JavaScript in your browser.
END_OF_DOCUMENT_TOKEN_TO_BE_REPLACED

This feature require that you enable JavaScript in your browser.
END_OF_DOCUMENT_TOKEN_TO_BE_REPLACED

This feature require that you enable JavaScript in your browser.
END_OF_DOCUMENT_TOKEN_TO_BE_REPLACED