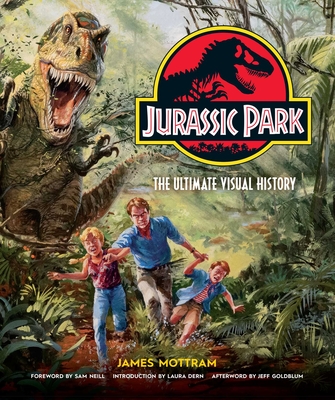 Welcome to Jurassic Park! Discover the cinematic evolution of the Jurassic Park trilogy, with this deluxe book celebrating the saga’s massive impact on pop culture.

Director Steven Spielberg’s Jurassic Park unleashed an island of awe-inspiring dinosaurs, captivating audiences worldwide. Grossing over $900 million worldwide, the film ushered in a whole new age of digital visual effects and would go on to enthrall generations of moviegoers.

The most comprehensive book about the Jurassic Park trilogy to date, Jurassic Park: The Ultimate Visual History begins with an in-depth account of the making of Spielberg’s original film, including rare and never-before-seen imagery and exclusive interviews with key creatives. Readers will then unearth the full history of the trilogy, from The Lost World: Jurassic Park to Jurassic Park III, through unprecedented access to the creative process behind the films. Fans will also find a fascinating look at the wider world of the saga, including video games, toys, comics, and more, exploring the lasting legacy of the movies and their influence on pop culture.

Jurassic Park: The Ultimate Visual History will be the last word on the most epic saga in movie history—the definitive behind-the-scenes book that fans have been waiting for.

James Mottram is a film critic, journalist, and author. He has written several books on cinema, including The Making of Memento, The Sundance Kids, and, for Insight Editions, The Making of Dunkirk, Die Hard: The Ultimate Visual History, The Secrets of Tenet: Inside Christopher Nolan’s Quantum Cold War, and Jurassic Park: The Ultimate Visual History. He has also contributed to numerous critical anthologies on everything from Japanese cinema to war movies, and is a regular on movie podcast Inside Total Film. He lives in London.

"Readers can indulge in every aspect of the making of this foundational trio of Jurassic Park films to discover the genesis of its adaptations and earth-shattering impact on modern pop culture."
— Inverse

This feature require that you enable JavaScript in your browser.
END_OF_DOCUMENT_TOKEN_TO_BE_REPLACED

This feature require that you enable JavaScript in your browser.
END_OF_DOCUMENT_TOKEN_TO_BE_REPLACED

This feature require that you enable JavaScript in your browser.
END_OF_DOCUMENT_TOKEN_TO_BE_REPLACED