The Girl Who Lived: A Thrilling Suspense Novel (Hardcover) 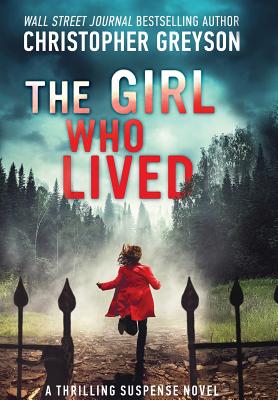 No one believes her story.
The police think she's crazy.
Her therapist thinks she's suicidal.
Everyone else thinks she's a dangerous drunk.
They're all right--but did she see the killer?

As the anniversary of the murders approaches, Faith Winters is released from the psychiatric hospital and yanked back to the last spot on earth she wants to be--her hometown where the slayings took place. Wracked by the lingering echoes of survivor's guilt, Faith spirals into a black hole of alcoholism and wanton self-destruction. Finding no solace at the bottom of a bottle, Faith decides to track down her sister's killer--only to discover that she's the one being hunted.

How can one woman uncover the truth when everyone's a suspect--including herself?

From the mind of Wall Street Journal bestselling author Christopher Greyson comes a story with twists and turns that take the reader to the edge of madness. The Girl Who Lived should come with a warning label: once you start reading, you won't be able to stop. Not since Girl on the Train and Gone Girl has a psychological thriller kept readers so addicted--and guessing right until the last page.

Grab your copy of this highly-acclaimed psychological thriller today

"Christopher Greyson has created a thriller on par with The Girl on the Train, only with more suspects, more danger, and more agony for the young heroine." -- Killer Nashville

"The plot turns come fast and furious... Sharp characters enmeshed in a mystery that, particularly in its final lap, is a gleefully dizzy ride." -- Kirkus Reviews

"Greyson is a master of weaving suspense and keeping the reader guessing..." -- NetGalley Review

Christopher Greyson's novels have been read by over a million readers and counting.

Look for other standalone novels by Wall Street Journal bestselling author Christopher Greyson. These books can be read in any order:

Christopher Greyson's novels weave tales full of mystery, action, and suspense with laugh-out-loud humor and sizzling romance. His unique stories and no-nonsense style of writing will take you on a page-turning roller coaster ride of emotions right to the very end. Visit ChristopherGreyson.com to find out more about your favorite characters, giveaways, and updates on new book releases.

This feature require that you enable JavaScript in your browser.
END_OF_DOCUMENT_TOKEN_TO_BE_REPLACED

This feature require that you enable JavaScript in your browser.
END_OF_DOCUMENT_TOKEN_TO_BE_REPLACED

This feature require that you enable JavaScript in your browser.
END_OF_DOCUMENT_TOKEN_TO_BE_REPLACED