A Theory of Human Motivation (Paperback) 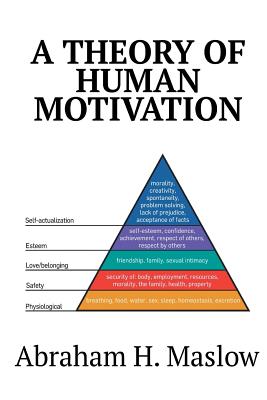 This is the article in which Maslow first presented his hierarchy of needs. It was first printed in his 1943 paper "A Theory of Human Motivation". Maslow subsequently extended the idea to include his observations of humans' innate curiosity. His theories parallel many other theories of human developmental psychology, some of which focus on describing the stages of growth in humans. Maslow described various needs and used the terms "Physiological, Safety, Belongingness and Love, Esteem, Self-Actualization and Self-Transcendence" needs to describe the pattern that human motivations generally move through. Maslow studied what he called exemplary people such as Albert Einstein, Jane Addams, Eleanor Roosevelt, and Frederick Douglass rather than mentally ill or neurotic people.

This feature require that you enable JavaScript in your browser.
END_OF_DOCUMENT_TOKEN_TO_BE_REPLACED

This feature require that you enable JavaScript in your browser.
END_OF_DOCUMENT_TOKEN_TO_BE_REPLACED

This feature require that you enable JavaScript in your browser.
END_OF_DOCUMENT_TOKEN_TO_BE_REPLACED