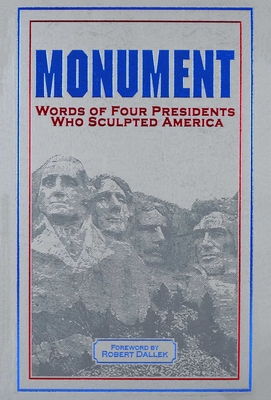 The contributions of these four presidents are forever set in stone!

From personal correspondence to presidential speeches and documents, Monument: Words of Four Presidents Who Sculpted America explores the written words of the men forever remembered on the face of Mount Rushmore National Memorial in South Dakota. Originally a project to boost tourism, the sculpture received congressional approval in 1925, and construction was completed in 1941, shortly after the death of sculptor Gutzon Borglum. Canterbury Classics has gathered historic documents penned by George Washington, Thomas Jefferson, Abraham Lincoln, and Theodore Roosevelt into this beautiful leather-bound volume, and added introductions by learned scholars to outline the contribution each president made to the birth, growth, development, and preservation of the United States. Also included is the story of how Mount Rushmore came to be, and a foreword written by historian Robert Dallek. With more than two million visitors annually, Mount Rushmore lives up to its status as a “Shrine of Democracy,” and this rich piece of U.S. history is preserved in this timeless collectible edition.

Robert Dallek is an emeritus professor of history at UCLA. He has taught at Columbia University, UCLA, Oxford (where he was Harmsworth visiting professor), Boston University, and Dartmouth. He currently teaches at the Bing Stanford in Washington, a program that gives Stanford University students the opportunity to intern and study in Washington, D.C. He is the author of a dozen books on American history, including Franklin D. Roosevelt: A Political Life;An Unfinished Life: John F. Kennedy, 1917-1963; volumes on Lyndon Johnson and Harry Truman; Nixon and Kissinger: Partners in Power; and Hail to the Chief: The Making and Unmaking of American Presidents. In 2020, he will publish How Did We Get Here? From TR to Donald Trump. He is an elected Fellow of the American Academy of Arts and Scientists. He currently resides in Washington, D.C.

George Washington (1732–99) was one of the Founding Fathers and the first President of the United States. He led the American forces to victory over the British during the Revolutionary War, presided over the 1787 Constitutional Convention that established the U.S. federal government, and is generally referred to as the "Father of His Country."

Thomas Jefferson (1743–1826) was one of the Founding Fathers and the third President of the United States. He advocated for democracy and individual rights, and he produced many of the documents that laid the foundation and set the standards for the United States at both the state and federal level.

Abraham Lincoln (1809–1865) served as the sixteenth President of the United States. He led the nation during the Civil War, abolished slavery, modernized the U.S. economy, and strengthened the federal government. He was assassinated in 1865.

Theodore "Teddy" Roosevelt (1858–1919) served as the twenty-sixth President of the United States. One of the leaders of the Progressive Era, his policies in office helped set standards for food and drugs sold in the United States, regulated big business, established the U.S. Forest Service, and designated the first National Parks. He is consistently ranked by historians as one of the top five American presidents.

Ken Mondschein is a college professor, scholar, fencing master, jouster, and author with expertise in subjects ranging from medieval history to contemporary politics. He was a Fulbright scholar to France, received his PhD in history from Fordham University and is certified as a master of historical fencing by the US Fencing Coaches' Association. His work includes history, fencing, introductions to works of classic literature, and other projects.

This feature require that you enable JavaScript in your browser.
END_OF_DOCUMENT_TOKEN_TO_BE_REPLACED

This feature require that you enable JavaScript in your browser.
END_OF_DOCUMENT_TOKEN_TO_BE_REPLACED

This feature require that you enable JavaScript in your browser.
END_OF_DOCUMENT_TOKEN_TO_BE_REPLACED