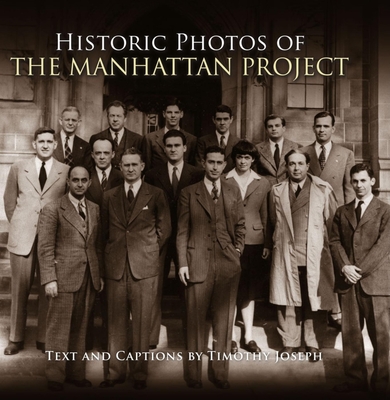 The atomic age began at 5:30 a.m. on July 16, 1945, with the explosion of "the Gadget" at Trinity near Alamogordo, New Mexico. Prelude to the bombing of Hiroshima and Nagasaki, which forced the capitulation of Japan and ended World War II, the Trinity test was the culmination of herculean efforts by scientists, civilians, and the military of the United States to tap the potential of the atom for a wartime emergency. If Nazi Germany could engineer the bomb first, an Allied victory against Hitler was all but lost. Historic Photos of the Manhattan Project is a look back at the epic struggle to build the world's first atomic bomb. Nearly 200 images in vivid black-and-white reveal the project as it unfolded, from its secretive origins at Oak Ridge, Hanford, and Los Alamos, to the day Americans celebrated triumph over the Axis powers with victory over Japan. A pinnacle moment in the history of the United States, the Manhattan Project's application of Einstein's famous equation E = MC2 shows, perhaps better than any other single endeavor, what can be achieved by human ingenuity when the citizens of a great nation are united in freedom against a fearsome and despotic foe.

This feature require that you enable JavaScript in your browser.
END_OF_DOCUMENT_TOKEN_TO_BE_REPLACED

This feature require that you enable JavaScript in your browser.
END_OF_DOCUMENT_TOKEN_TO_BE_REPLACED

This feature require that you enable JavaScript in your browser.
END_OF_DOCUMENT_TOKEN_TO_BE_REPLACED