Serious Reflections During the Life and Surprising Adventures of Robinson Crusoe with his Vision of the Angelick World: The Stoke Newington Edition (Paperback) 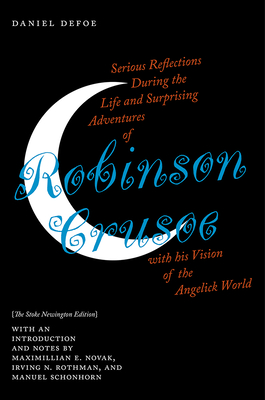 Serious Reflections During the Life and Surprising Adventures of Robinson Crusoe with his Vision of the Angelick World, first published in 1720 and considered a sequel to The Farther Adventures of Robinson Crusoe, is a collection of essays written in the voice of the Crusoe character. Expressing Defoe’s thoughts about many moral questions of the day, the narrator takes up isolation, poverty, religious liberty, and epistemology. Defoe also used this volume to revive his interest in poetry, not the satiric poetry of the early eighteenth century, but the more inspirational verse that appeared in some of his later works. Serious Reflections also includes an imaginative flight in which Crusoe wanders among the planets, a return to the moon voyage impulse of Defoe’s 1705 work The Consolidator. Illuminating the ideas and philosophy of this most influential of English novelists, it is invaluable for any student of the period.

MAXIMILLIAN E. NOVAK is Distinguished Research Professor of English at the University of California, Los Angeles. He has published widely on seventeenth-­ and eighteenth­-century literature, has edited a number of volumes in the “Cali­fornia Dryden,” has written five books on Daniel Defoe, and is a general editor of the Stoke Newington Edition of the Writings of Daniel Defoe.

IRVING N. ROTHMAN, who passed away in April 2019, was a professor of English at the University of Houston, where he had taught since 1967. He was one of the general editors of the Stoke Newington Edition of the Writings of Daniel Defoe and edited or coedited three volumes, including The Political History of the Devil and two volumes of The Family Instructor.

MANUEL SCHONHORN, who passed away in April 2021, was a professor of English emeritus at Southern Illinois University. His books include Defoe’s General History of the Pirates and Defoe’s Politics: Parliament, Power, Kingship and “Robinson Crusoe.” He published articles on Defoe, Pope, Fielding, Sterne, Austen, Twain, and Hemingway, was the recipient of several fellowships and awards, including the Clark Library–UCLA Fellow, Huntington Library Fellow, and Newberry Library–British Academy Exchange Fellow, and was a member of the Columbia University Seminar in Eighteenth­-Century European Culture.

"Robinson Crusoe takes credit in the Preface for the authorship of this third part of the trilogy of The Adventures of Robinson Crusoe, but this book is markedly different from the first two volumes. Crusoe rambles through a dozen large questions of social and religious morality which he contends are allegorized in his life. Even the best readers of Defoe can benefit from having a guide through this philosophical labyrinth. Fortunately, the introduction and notes to this superbly edited volume provide the necessary guidance and insight to make the Serious Reflections of Robinson Crusoe accessible, perhaps for the first time."
— Geoffrey Sill

"The editors of Serious Reflections provide useful, contextual, and reasonably tempered reflections of their own on the abundant run of Defoe’s material. Serious Reflections is a kind of topographical survey of the early eighteenth-century mind and this definitive edition charts that survey with a wonderful scholarly and critical agility throughout."
— Michael Seidel

This feature require that you enable JavaScript in your browser.
END_OF_DOCUMENT_TOKEN_TO_BE_REPLACED

This feature require that you enable JavaScript in your browser.
END_OF_DOCUMENT_TOKEN_TO_BE_REPLACED

This feature require that you enable JavaScript in your browser.
END_OF_DOCUMENT_TOKEN_TO_BE_REPLACED