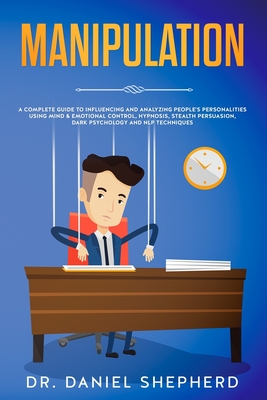 By Daniel Shepherd
$15.95
usually available in 3-7 days
(This is a special order book which cannot be returned.)

When we think of Manipulation, we often think of gurus of sectarian movements, unscrupulous businessmen, etc. Yet manipulation is far more widespread than it seems. It is a part of life and it is the very foundation of society.

Manipulation is first and foremost a collective affair. It is a cultural and historical fact: religions, science, and politics have always influenced men. At the time when religion was predominant, the clergy manipulated the masses. Today, the media influences millions of people.

Every day we are forced to interact with others, and these interactions are governed by more or less visible manipulations.

For example, if your baker advertises a promotion on croissants, you are tempted to buy some, but it may be manipulation on his part. The same thing applies if a shoe store salesman tells you that it is the last pair in stock. Although this could be either true or false, this information may make you pull out your wallet. Similarly, when a mother asks her child to choose between tidying up his room and cleaning the whole house, she is using manipulation techniques.

This book will teach you how not to confuse manipulation and "manipulators."

In our personal and professional life, manipulation creates a rift between individuals. It is not because one "manipulates" one's colleagues or one's love from time to time that one becomes an infamous manipulator. Imagine not being able to ask for a favor from a relative? Is your boss a manipulator because he asks you to work thirty minutes more each day without paying you more? Without manipulation, our society would be static without any possibility of evolution.

In this book, you will learn to identify manipulation techniques and it will show how you use them regularly.

You will also learn about positive manipulation, a form of manipulation that never hurts others. Finally, you will learn techniques of persuasion and communication that may have influenced you in the past.

The purpose of this book is also to reveal the tricks of manipulation so that you can spot them in your everyday life - and, if necessary, protect yourself from them.

Order this book NOW and delve into the world of Manipulation

This feature require that you enable JavaScript in your browser.
END_OF_DOCUMENT_TOKEN_TO_BE_REPLACED

This feature require that you enable JavaScript in your browser.
END_OF_DOCUMENT_TOKEN_TO_BE_REPLACED

This feature require that you enable JavaScript in your browser.
END_OF_DOCUMENT_TOKEN_TO_BE_REPLACED