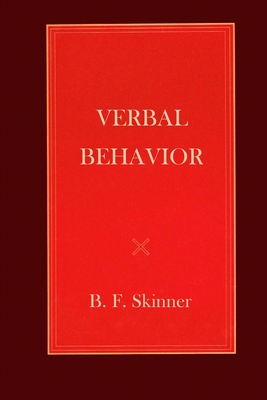 At the age of 30, B. F. Skinner found himself at a dinner sitting next to Professor Alfred North Whitehead. Never one to lose an opportunity to promote behaviorism, Skinner expounded its main tenets to the distinguished philosopher. Whitehead acknowledged that science might account for most of human behavior but he would not include verbal behavior. He ended the discussion with a challenge: "Let me see you," he said, "account for my behavior as I sit here saying, 'No black scorpion is falling upon this table.'" The next morning Skinner began this book. It took him over twenty years to complete. The book extends the laboratory-based principles of selection by consequences to account for what people say, write, gesture, and think. Skinner argues that verbal behavior requires a separate analysis because it does not operate on the environment directly, but rather through the behavior of other people in a verbal community. He illustrates his thesis with examples from literature, the arts, and the sciences, as well as from his own verbal behavior and that of his colleagues and children. Perhaps it is because this theoretical work provides a way to approach that most human of human behavior that Skinner often called Verbal Behavior his most important work.

This feature require that you enable JavaScript in your browser.
END_OF_DOCUMENT_TOKEN_TO_BE_REPLACED

This feature require that you enable JavaScript in your browser.
END_OF_DOCUMENT_TOKEN_TO_BE_REPLACED

This feature require that you enable JavaScript in your browser.
END_OF_DOCUMENT_TOKEN_TO_BE_REPLACED