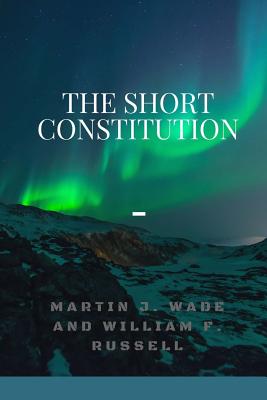 By William F. Russell, Martin J. Wade
$11.99
Backordered - OK to 'add to cart' and we'll let you know when your copy is here
(This is a special order book which cannot be returned.)

"The Short Constitution" is one of a series of volumes entitled "Elementary Americanism", intended for use in the home, the club, the school, and in general Americanization work. It is our hope that regular courses in "Americanism" will soon be established in all schools, colleges, and universities. We use the term "Americanism" because we feel that it signifies something broader, deeper, and more appealing than any title now used in the schools in the teaching of American government, or citizenship, or the rights and duties of the citizens of the United States. We like the term "America" better than "the United States". "The United States" suggests boundaries, codes, and constitutions. "America" suggests all these and then it suggests spirit. There is such a thing as "Americanism". It includes all there is of information relating to our country; but it also has a soul "Americanism" relates to democracy, into which enter all the ideals, all the impulses and emotions of men, women, and children. "Americanism" teaches not only the relation of the States to the National government, and the relation of citizens to both the State and the National government, but it also teaches the relation of men, women, and children to each other.

Martin Joseph Wade (October 20, 1861 - April 16, 1931) was a one-term Democratic U.S. Representative from Iowa's 2nd congressional district, and a U.S. District Court judge.William F. Russell (born circa 1805) was a Florida settler, soldier, and member of the Florida House of Representatives, serving as Speaker of the House in 1854. Russell was born in North Carolina. He became a major, and was put in charge of the Indian River Settlement in St. Lucia County, which broke up following an attack by Seminole Indians in July 1849.

This feature require that you enable JavaScript in your browser.
END_OF_DOCUMENT_TOKEN_TO_BE_REPLACED

This feature require that you enable JavaScript in your browser.
END_OF_DOCUMENT_TOKEN_TO_BE_REPLACED

This feature require that you enable JavaScript in your browser.
END_OF_DOCUMENT_TOKEN_TO_BE_REPLACED