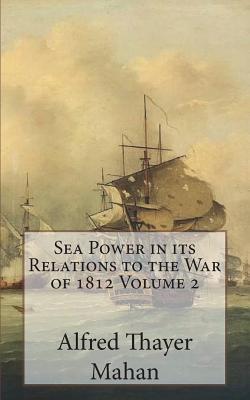 By Alfred Thayer Mahan
$20.99
Special Order - may be out of print

Sea Power in its Relations to the War of 1812 Volume 2 By Alfred Thayer Mahan The squadron under Commodore William Bainbridge, the third which sailed from the United States in October, 1812, started nearly three weeks after the joint departure of Rodgers and Decatur. It consisted of the "Constitution" and sloop of war "Hornet," then in Boston, and of the "Essex," the only 32-gun frigate in the navy, fitting for sea in the Delaware. The original armament of the latter, from which she derived her rate, had been changed to forty 32-pounder carronades and six long twelves; total, forty-six guns. It is noticeable that this battery, which ultimately contributed not merely to her capture, but to her almost helplessness under the fire of an enemy able to maintain his distance out of carronade range, was strongly objected to by Captain Porter. On October 14 he applied to be transferred to the "Adams," giving as reasons "my insuperable dislike to carronades, and the bad sailing of the "Essex," which render her, in my opinion, the worst frigate in the service." The request was not granted, and Porter sailed in command of the ship on October 28, the two other vessels having left Boston on the 26th. We are delighted to publish this classic book as part of our extensive Classic Library collection. Many of the books in our collection have been out of print for decades, and therefore have not been accessible to the general public. The aim of our publishing program is to facilitate rapid access to this vast reservoir of literature, and our view is that this is a significant literary work, which deserves to be brought back into print after many decades. The contents of the vast majority of titles in the Classic Library have been scanned from the original works. To ensure a high quality product, each title has been meticulously hand curated by our staff. Our philosophy has been guided by a desire to provide the reader with a book that is as close as possible to ownership of the original work. We hope that you will enjoy this wonderful classic work, and that for you it becomes an enriching experience.

This feature require that you enable JavaScript in your browser.
END_OF_DOCUMENT_TOKEN_TO_BE_REPLACED

This feature require that you enable JavaScript in your browser.
END_OF_DOCUMENT_TOKEN_TO_BE_REPLACED

This feature require that you enable JavaScript in your browser.
END_OF_DOCUMENT_TOKEN_TO_BE_REPLACED