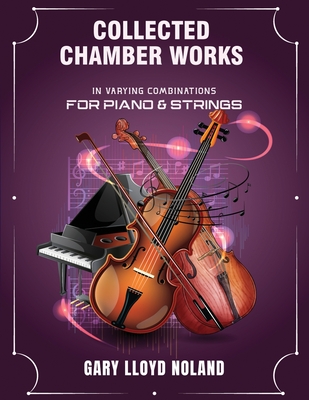 This volume contains the scores & parts of ten pre-COVID chamber works in varying combinations for violin, viola, cello & piano by composer Gary Lloyd Noland (b. 1957). These works were composed within a 30-year time frame spanning the last two decades of the 20th century and first decade of the 21st century (1980-2010). Included in this volume are Noland's: WALTZ FANTASY for violin & piano Op. 87, KORNGOLDAROONIE for string trio Op. 93, IRRATIONALISMUS for cello & piano Op. 96, BIRCHERMUESLI: "Cereal Music" for string quartet Op. 6, ROMANCE for viola & piano Op. 10, POCKET TRIO for violin, cello & piano Op. 79, INTERMEZZO for violin & piano Op. 18, DOG DUO for viola & cello Op. 66a, FANTASY IN E MINOR for cello & piano Op. 24, and FUGUE IN G MAJOR for string quartet Op. 13. All of these works were composed for professional classical musicians to perform on recitals and concerts. They are also suitable for seasoned undergraduate and graduate student musicians as well as talented amateur and high school aged musicians, not to mention the occasional prodigiously gifted tween or twain. Having received both high critical acclaim for, and enthusiastic reception to, his music over the past three-plus decades, it is only until recently (2021) that many scores of his compositions had been relatively difficult to come by, as they had heretofore been haphazardly available in only limited costly editions. The publication of this collection marks the third in a series of comfortably affordable volumes of Noland's compositions that may prove to be of interest not only to seasoned chamber musicians (i.e., violinists, violists, cellists & pianists), but also to serious scholars of contemporary classical music. Noland has stood out consistently over the years, ever since having done his time as a student composer in the mid 1970s to late 1980s, as one of the chief proponents from his generation (late baby-boom) of a way of composing that could easily lend itself to being acknowledged (rather than dismissed), by responsible critics and musicologists, as having eventually led towards, or at very least having become inadvertently entangled with, a trend of sorts symptomatic of a bona fide school of thinking insofar as its having represented his own (and certain other composer's) instinctive propensities for refusing categorically to succumb to mainstream musical whimsies dictated by the academic marketplace (if, indeed, there is such a thing). It is not the calling of any composer worth his salt, what with (as is par for the course) such entities being in possession of a patently conspicuous myopic vision, but rather that of discerning music critics, competent musicologists, and discriminating musical connoisseurs, to sort such things out. While such pigeonholing is to be eschewed at all costs, it is, still and all, a necessary evil. It is unmistakably evident to this composer that a new proclivity of sorts has emerged amongst young composers, as exemplified by the musics created by certain high-minded members of the post baby-boom generation(s) (i.e., Gen Xers, Millennials, and Zoomers), whose musical outpourings tend to be less self-consciously influenced by the more anarchistic, nihilistic, pessimistic approaches of the post-war academic modernists (namely: those who produce(d) works that tend toward the stochastically anal and promiscuously higgledy-piggledy) than their immediate forebears. Indeed, Melody and Harmony appear to be thriving once again in certain august musical circles. One can almost seize upon some vague semblance of historical continuity being manifested thereby-a sort of picking-up-where-things-left-off phenomenon-after a sluggish lapse dominated by steaming piles of post-war dreckage, during which years, it must be owned, many serviceable technical innovations were inaugurated by members of the (then) musical elite in all its avant-garden-variety splendor.

This feature require that you enable JavaScript in your browser.
END_OF_DOCUMENT_TOKEN_TO_BE_REPLACED

This feature require that you enable JavaScript in your browser.
END_OF_DOCUMENT_TOKEN_TO_BE_REPLACED

This feature require that you enable JavaScript in your browser.
END_OF_DOCUMENT_TOKEN_TO_BE_REPLACED