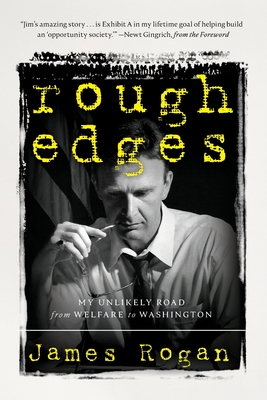 James Rogan was born to a single mother cocktail waitress who later raised her four children on welfare and food stamps, and who ended up as a convicted felon. His bartender father abandoned his mother and him before his birth. Despite growing up in San Francisco's hardscrabble Mission District, he became a political and history aficionado as a young boy, and he once convinced former President Harry S Truman to help him with his homework. But Rogan traveled in a tough circle of friends, and after years of borderline delinquency, he ended up expelled from high school. After that, he worked at a variety of low-end jobs, from porn theater bouncer to bartender at both a Hollywood Sunset Strip female mud wrestling bar and a Hell's Angels hangout. Along the way, a young Arkansas lawyer with whom he had a chance 1978 meeting urged him to continue his education, study law, and consider entering politics in the future.

In time, Rogan scrapped his way through college and law school, and then he worked as a Los Angeles County deputy district attorney prosecuting killers in the elite Hardcore Gang Murder Unit. Later, he became a state court judge, the majority leader of the California State Assembly, and a United States congressman from Southern California. In 1998, as a Republican member of the House Judiciary Committee, his colleagues selected him to help lead the impeachment and prosecution of President Bill Clinton-the same Arkansas lawyer who advised him to go into law and politics two decades earlier.

Rough Edges is a rarity among Washington tales. It is full of outrageous stories, wild humor, pull-no-punches candor, and downright fun. Told in Rogan's engaging and frank voice, his story is certainly the most freewheeling-and the most honest-political memoir ever written.

This feature require that you enable JavaScript in your browser.
END_OF_DOCUMENT_TOKEN_TO_BE_REPLACED

This feature require that you enable JavaScript in your browser.
END_OF_DOCUMENT_TOKEN_TO_BE_REPLACED

This feature require that you enable JavaScript in your browser.
END_OF_DOCUMENT_TOKEN_TO_BE_REPLACED