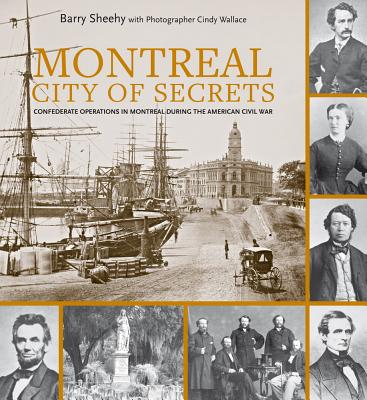 Barry Sheehy is an accomplished speaker, business consultant and author whose works have appeared along side of those of Presidents Clinton and Bush, Alan Greenspan, Robert Rubin and business leaders such as Lou Gerstner, Jack Welch, and Michael Dell, Edwards Deming, Stephen R. Covey, Rosabeth Moss Kanter, Gary Hamel, Peter Senge and Tom Peters. Cindy Wallace is a photographer and an art and photography professor with a Master’s in Fine Arts from Georgia Southern University.

"One of the most important keys to understanding John Wilkes Booth and the assassination of Abraham Lincoln is the role of the Confederate operations in Montreal. It has received too little attention from historians – until now. Barry Sheehy lays out the case for the involvement of the Confederates in a concise and convincing manner showing once and for all that Booth could not have carried out his plot without their direct help. It is about time." —Ed Steers, author, Blood on the Moon: The Assassination of Abraham Lincoln

"A lively and graphically rich exposé of Rebel operations engineered north of the North . . . John Wilkes Booth's Montreal connections have been firmly established by others. Sheeh follows its evolution from kidnapping to assassination. The authors even speculate that the idea of killing Lincoln may well have been planted in Booth's mind by people surrounding him in Montreal." —Gordon Berg, America's Civil War

"For anyone who thought the Civil War had no more secrets to reveal, Montreal: City of Secrets spills over with a story that is nothing less than incredible . . . . It’s a story of influence peddling, espionage, blockade running, kidnapping, assassination, and more." —Eric Calonius, author, The Wanderer: The Last American Slave Ship and the Conspiracy that Set Its Sails

"John Wilkes Booth? A lone crackpot? No, part of a conspiracy based in Montreal where confederates felt right at home. As soon as I received this book, I read the first page and didn’t put it down until I finished. Fascinating! Full of surprises on every page.” —Ishmael Reed, poet, novelist, essayist and author, The Complete Muhammad Ali

"In Montreal, City of Secrets, author Barry Sheehy paints a vivid portrait of a city teeming with spies, smugglers, and assassins. (…) Well-researched, with detailed endnotes and ample black-and-white period photography, the book is a real eye-opener for those who think Canada sat idly by during America’s bloodiest conflict." —Mark Collin Reid, Canada's History

"The lavish inclusion and excellent reproductions of many Notman photos from the McCord Collection are in themselves worth the acquisition of this outstandingly researched and clearly-written history." —Sandra Stock, Quebec Heritage News

This feature require that you enable JavaScript in your browser.
END_OF_DOCUMENT_TOKEN_TO_BE_REPLACED

This feature require that you enable JavaScript in your browser.
END_OF_DOCUMENT_TOKEN_TO_BE_REPLACED

This feature require that you enable JavaScript in your browser.
END_OF_DOCUMENT_TOKEN_TO_BE_REPLACED