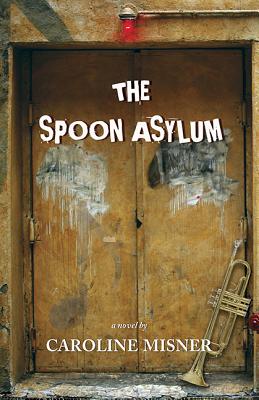 The Spoon Asylum draws its title from a group of 1930s exiles who found refuge in a small northern Ontario resort and bonded while playing jazz and polishing the resort's cutlery together on Sunday afternoons. In the story, the Great Depression is at its peak in Davisville when a train delivering salt cod to the impoverished prairies comes chugging into town and expels its cargo of disillusioned young men who have taken to riding the rails in search of work. Haven Cattrell is determined to leave Davisville just as soon as he has a little money. But work is scarce in the small community and only a chance meeting between Haven and Wetherby Moss, an American jazz musician from Detroit, keeps Haven from striking out again. It is Wetherby who puts Haven in touch with Eleanor Nokomis, an eccentric woman who runs an all-girls camp on Lake Manito. Here Haven is hired as a cook's assistant and the cook happens to be Wetherby's son, Jude Moss. It is here at Camp Nokomis that Haven's life-changing adventure begins.

Listening to Wetherby play the reveille on his trumpet in the mornings and his jazz licks at night conjures a desire in Haven that he didn't know was there. Jazz catches him quite by surprise and after insistently begging Wetherby to teach him to play, Haven begins his apprenticeship, first with a harmonica and then with the trumpet itself. During the course of his work and musical education, Haven befriends Wetherby, Jude, Charlotte Handler, a camp girl, and Marcus -- a young man who had been riding the train. Together they form a raffish group of misfits, rebels, and outsiders coaxing jazz out of whatever instruments they can scrounge.

What follows is a series of adventures that unfold around Wetherby Moss and his son, and the forces of racism that drove them out of Detroit to this asylum in the northern woods. That racism finds its way to Davisville, spurring on a small band of troublemakers from a nearby boys' camp who disapprove of the two black men and a Jewish girl in the camp. The harassment and bigotry culminates in their prank of a cross burning. Unsettling to all, but especially to Charlotte, Haven and his friends are caught in both personal and public events that threaten the well-being of Camp Nokomis and have grave consequences for some. Haven and Charlotte, who have begun a budding romance, are witness to the destruction and death that follow, all the while holding tight to their dream of playing jazz.

Caroline Misner's work has appeared in numerous publications in the US, Canada, India, and the UK. She has been nominated for the prestigious McClelland & Stewart Journey Prize for the short story "Strange Fruit;" in 2011 another short story and a poem were nominated for the Pushcart Prize. She lives in the beautiful Haliburton Highlands of Northern Ontario where she continues to draw inspiration for her work. She is the author of the young adult fantasy series, The Daughters of Eldox.

This feature require that you enable JavaScript in your browser.
END_OF_DOCUMENT_TOKEN_TO_BE_REPLACED

This feature require that you enable JavaScript in your browser.
END_OF_DOCUMENT_TOKEN_TO_BE_REPLACED

This feature require that you enable JavaScript in your browser.
END_OF_DOCUMENT_TOKEN_TO_BE_REPLACED