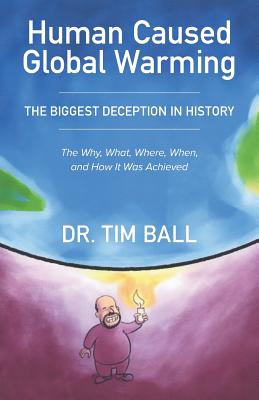 This book examines the claims of human induced global warming made by the Intergovernmental Panel on Climate Change (IPCC) using proper journalistic and investigative techniques. It explains how it was a premeditated, orchestrated deception, using science to impose a political agenda. It fooled a majority including most scientists. They assumed that other scientists would not produce science for a political agenda. German Physicist and meteorologist Klaus-Eckart Puls finally decided to look for himself. Here is what he discovered.

Ten years ago I simply parroted what the IPCC told us. One day I started checking the facts and data--first I started with a sense of doubt but then I became outraged when I discovered that much of what the IPCC and the media were telling us was sheer nonsense and was not even supported by any scientific facts and measurements. To this day I still feel shame that as a scientist I made presentations of their science without first checking it....scientifically it is sheer absurdity to think we can get a nice climate by turning a CO2 adjustment knob.

This book uses the same approach used in investigative journalism. It examines the Who, What, Where, When, Why, and How.

This feature require that you enable JavaScript in your browser.
END_OF_DOCUMENT_TOKEN_TO_BE_REPLACED

This feature require that you enable JavaScript in your browser.
END_OF_DOCUMENT_TOKEN_TO_BE_REPLACED

This feature require that you enable JavaScript in your browser.
END_OF_DOCUMENT_TOKEN_TO_BE_REPLACED