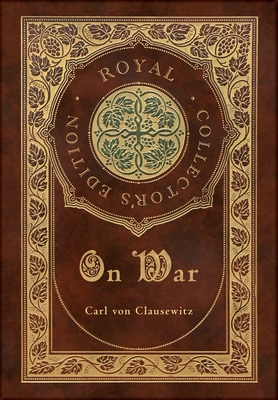 By Carl Von Clausewitz
Email or call for price.

On War is a book on military strategy by Prussian general Carl von Clausewitz, written mostly after the Napoleonic wars, between 1816 and 1830, and published posthumously in 1832. On War is one of the most important treatises on political-military analysis and strategy ever written, and remains both controversial and an influence on strategic thinking.

Clausewitz was among those intrigued by the manner in which the leaders of the French Revolution, especially Napoleon, had changed the conduct of war through their ability to motivate the populace and to gain access to the full resources of the state; thus unleashing war on a greater scale than had previously been seen in Europe. Clausewitz was well educated and had strong interests in art, history, science, and education. He was a professional soldier who spent a considerable part of his life fighting against Napoleon. The insights he gained from his political and military experiences, combined with a solid grasp of European history, allowed Clausewitz to write a definitive book on military strategy.

This edition contains all three volumes of On War, and includes an introduction, a biography, and annotations. This case laminate collector's edition includes a Victorian inspired dust-jacket.

This feature require that you enable JavaScript in your browser.
END_OF_DOCUMENT_TOKEN_TO_BE_REPLACED

This feature require that you enable JavaScript in your browser.
END_OF_DOCUMENT_TOKEN_TO_BE_REPLACED

This feature require that you enable JavaScript in your browser.
END_OF_DOCUMENT_TOKEN_TO_BE_REPLACED