A Travel Guide to Homer: On the Trail of Odysseus Through Turkey and the Mediterranean (Hardcover) 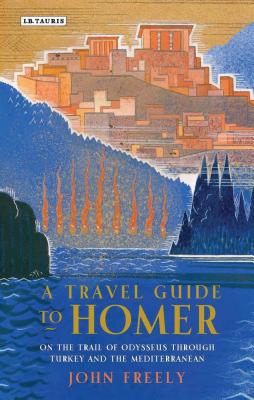 In October 1945, at the age of 19, John Freely passed the southernmost tip of Crete on his way home from the war in China, just as Odysseus did on his homeward voyage from the battle of Troy. He has been mesmerized with Homer and the lands of Homer's epics ever since. Throughout his life spent exploring both these lands and the stories by and connected to Homer, Freely has forged a captivating traveler's guide to Homer's lost world and to his epics-- The Iliad and The Odyssey--investigating where such places as the Land of the Lotus Eaters are and what it was about the landscapes of Greece and Turkey that influenced and inspired Homer-- arguably the greatest classical epic poet.This will be a traveler's guide to all of those places linked to Homer that can be identified and it will also speculate on where such places as the Land of the Lotus Eaters might be. With a revealing introduction to Homer and his times and an outline of the wanderings of Odysseus, the book follows in his footsteps from Troy to his final return to Ithaca. Finally, Freely illuminates how the Homeric epics took their final form and their subsequent echoes in literature, art, legend and folklore: all part of the romance of the wandering hero.

John Freely was born in New York and joined the US Navy at the age of 17, serving with a commando unit in Burma and China during the last years of World War II. He has lived in New York, Boston, London, and Athens, and currently lives in Istanbul and has written over 40 travel books and guides, most of them about Greece and Turkey. He is author of The Grand Turk, Storm on Horseback, Children of Achilles, The Cyclades, The Ionian Islands, Celestial Revolutionary, and Light from the East, Crete, The Western Shores of Turkey, Strolling through Athens, Strolling through Venice, and Strolling through Istanbul.

This feature require that you enable JavaScript in your browser.
END_OF_DOCUMENT_TOKEN_TO_BE_REPLACED

This feature require that you enable JavaScript in your browser.
END_OF_DOCUMENT_TOKEN_TO_BE_REPLACED

This feature require that you enable JavaScript in your browser.
END_OF_DOCUMENT_TOKEN_TO_BE_REPLACED