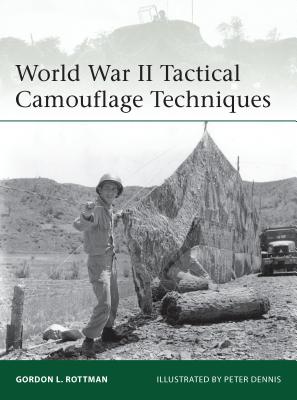 This is book number 192 in the Elite series.

Camouflage at the tactical level - i.e. by individual soldiers and small units - was standard practice for all World War II armies, since battlefield camouflage was one of many tactical techniques and skills essential for survival, and for the success of both defensive and offensive operations. Nevertheless, it was often poorly taught during training, and - at first - neglected by units under pressure of events. Troops therefore had to learn the hard way just how essential it was to master these techniques, given the long effective range of weapons and the effectiveness of enemy reconnaissance.

This book explains and illustrates the actual materials and techniques adopted (both successfully, and unsuccessfully) by tactical units - i.e. the concealment of personnel, weapons, equipment, field positions, and movement by infantry riflemen and weapons crews, artillerymen, and vehicle crews. It covers all areas and seasons in the European and Mediterranean theaters of operations, for the US, British, German, and Soviet armies. It includes camouflage of the person, personal equipment, and weapons; natural materials and "expedient" techniques; issued camouflage materials such as nets, ponchos, etc; the principles of camouflaging equipment and vehicles, of positioning and terrain integration, the effects of light and shadow, and the use of decoy and dummy positions.

“...pairs vintage black and white photos with color illustrations by Peter Dennis in the course of exploring military camouflage history. Detailed artwork and history considers US, British, German and Soviet practices, and offers a fine focus on camouflage techniques and their evolution.” —The Midwest Book Review (May 2013)

This feature require that you enable JavaScript in your browser.
END_OF_DOCUMENT_TOKEN_TO_BE_REPLACED

This feature require that you enable JavaScript in your browser.
END_OF_DOCUMENT_TOKEN_TO_BE_REPLACED

This feature require that you enable JavaScript in your browser.
END_OF_DOCUMENT_TOKEN_TO_BE_REPLACED