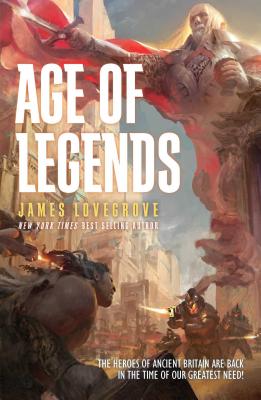 The Defenders of the Land

As Britain struggles under a burgeoning fascist government, Prime Minister Derek Drake plays the man of the people, while simultaneously purging the country of “undesirables.”

When bike courier and subversive graffiti artist Ajia Snell runs into trouble with the authorities, she finds herself recruited by living incarnations of Britain’s ancient legends, from Oberon, King of the Faeries to Robin Hood.

As Drake tightens his grip on the country’s soul, only Ajia and her new allies can stop him…

James Lovegrove is the author of nearly 60 books, including the New York Times bestselling Pantheon series, the Redlaw novels and the Dev Harmer Missions. He has produced five Sherlock Holmes novels and a Conan Doyle/Lovecraft mashup trilogy, The Cthulhu Casebooks. He has also written tie-in novels for the TV show Firefly. James has sold well over 50 short stories and published two collections, Imagined Slights and Diversifications. He has produced a dozen short books for readers with reading difficulties, and a four-volume fantasy saga for teenagers, The Clouded World, under the pseudonym Jay Amory. James has been shortlisted for numerous awards, including the Arthur C. Clarke Award, the John W. Campbell Memorial Award, the Bram Stoker Award, the British Fantasy Society Award and the Manchester Book Award. His short story “Carry The Moon In My Pocket” won the 2011 Seiun Award in Japan for Best Translated Short Story. His work has been translated into fifteen languages, and his journalism has appeared in periodicals as diverse as Literary Review, Interzone, BBC MindGames, All About History and Comic Heroes. He contributes a regular fiction-review column to the Financial Times and lives with his wife, two sons and tiny dog in Eastbourne.

“A compulsive, breakneck read by a master of the craft.”
— The Guardian

“One of the best series in urban fantasy available today.”
— Starburst Magazine

This feature require that you enable JavaScript in your browser.
END_OF_DOCUMENT_TOKEN_TO_BE_REPLACED

This feature require that you enable JavaScript in your browser.
END_OF_DOCUMENT_TOKEN_TO_BE_REPLACED

This feature require that you enable JavaScript in your browser.
END_OF_DOCUMENT_TOKEN_TO_BE_REPLACED