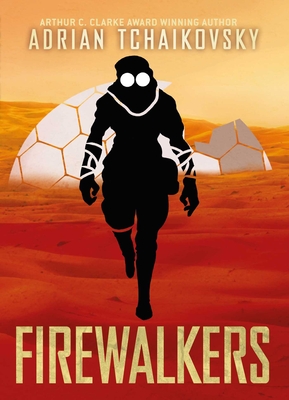 The Earth is burning. Nothing can survive at the Anchor; not without water and power. But the ultra-rich, waiting for their ride off the dying Earth? They can buy water. And thanks to their investment, the sun can provide power.

But someone has to repair the solar panels when they fail, down in the deserts below.

Kids like Mao, and Lupé, and Hotep; kids with brains and guts but no hope.

Adrian Tchaikovsky is the author of the acclaimed ten-book Shadows of the Apt series starting with Empire in Black and Gold, published by Tor UK. His other works for Tor UK include novels Guns of the Dawn, Children of Time, Children of Ruin and the Echoes of the Fall series starting with The Tiger and the Wolf. Other major works include Dogs of War, Redemption’s Blade, Cage of Souls, the Tales of the Apt collections, and the novellas The Bloody Deluge, Even in the Cannon’s Mouth, Ironclads and Walking to Aldebaran for Rebellion. He has won the Arthur C Clarke and Robert Holdstock awards.

"Tchaikovsky sharply addresses the connection between class and climate, weaving pressing ethical questions into a thrilling adventure. This is a must-read for fans of dystopian and climate change fiction." -- Publishers Weekly, starred review
— Publishers Weekly

"A grim picture of a possible future, a diverse cast of interesting and distinct characters, a dollop of mystery and technological shenanigans. There’s some good action, tricksy AI, and a satisfying ending. Recommended." -- Civilian Reader
— Civilian Reader

"I’m always impressed with the way that Adrian Tchaikovsky can turn his hand to any style of writing, any theme, and still come up with such wonderfully detailed stories." -- Fantasy Hive
— Fantasy Hive

"Every chapter throws fresh surprises at the reader, continually opening out the scope of the novel, and the imagery is wonderfully vivid throughout... Tchaikovsky focuses the taut story in such a way that every detail is relevant, building towards a climax that doesn’t feel possible at the beginning but which, by the end, feels like a perfect pay-off." -- SFX Magazine
— SFX Magazine

This feature require that you enable JavaScript in your browser.
END_OF_DOCUMENT_TOKEN_TO_BE_REPLACED

This feature require that you enable JavaScript in your browser.
END_OF_DOCUMENT_TOKEN_TO_BE_REPLACED

This feature require that you enable JavaScript in your browser.
END_OF_DOCUMENT_TOKEN_TO_BE_REPLACED