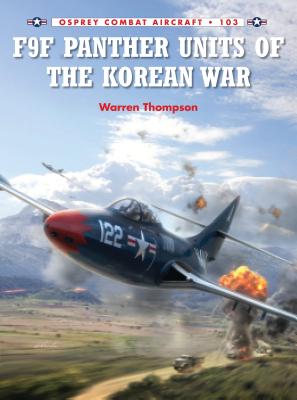 By Warren Thompson, Jim Laurier (Illustrator)
$22.95
Special Order - may be out of print

This is book number 103 in the Combat Aircraft series.

In 1948 the USAF, Marine Corps and US Navy were concentrating on converting over to an all-jet force. When the Korean War started in June 1950, the USAF had built up a sizable jet force in the Far East, while the US Navy was in the early stages of getting F9F Panthers operational as replacements for its piston-engined F8F Bearcats. At about this time, the Marine Corps had also begun using the Panthers in limited numbers. Operating from aircraft carriers off the Korean coast, F9Fs helped stop the North Korean invasion within two weeks of the communists crossing the 38th Parallel. The Panthers, escorting carrier-based AD Skyraiders and F4U Corsairs, penetrated as far north as Pyongyang, where they bombed and strafed targets that the North Koreans thought were out of range. The Panthers also took the battle all the way to the Yalu River, long before the MiG-15s became a threat. The F9F's basic tasking was aerial supremacy and combat air patrols, but they also excelled in bombing and strafing attacks. The Marine Corps, with its two Panther squadrons, was also involved in close air support and interdiction near the frontlines. There were a total of 32 Panther squadron deployments during the war, along with several special detachments that operated the F9F-2/5P unarmed photo-reconnaissance versions.

Warren Thompson has been an avid military aviation historian and editor for over 40 years and his personal reference collection includes thousands of photos and detailed interviews with over 2,000 pilots and aircrew members. He has had 25 books published including three books on the Korean War for Osprey. His book Korean War Aces in the Aircraft of the Aces series was a bestseller.

Jim Laurier is a native of New England and lives in New Hampshire. He attended Paier School of Art in Hamden, Connecticut, from 1974–78, and since graduating with Honours, he has been working professionally in the field of Fine Art and Illustration. He has been commissioned to paint for the US Air Force and has aviation paintings on permanent display at the Pentagon.

“If you are an enthusiast of the Korean War or the Panther, then this is a must have book for you. It is well researched and also reads well.” —Scott van Aken, www.modelingmadness.com (July 2014)

“Clearly, from the beginning of the book you realize the author, Warren Thompson, is extremely well versed in the Korean conflict, and he is a great researcher. The level of detail and accuracy in his narrative is outstanding. I recommend this book to aviation history aficionados. You won't be disappointed.” —Pablo Bauleo IPMS/USA

“An exciting and interesting book..F9F Panther units helped prevent the collapse of the United Nations defense of South Korea. Their story deserves to be told. This book does an excellent job of that and I heartily recommend it to historians, modelers, enthusiasts and artists of the F9F, the Korean War, and Navy and Marine air operations of the conflict.” —Frederick Boucher, KitMaker Network

This feature require that you enable JavaScript in your browser.
END_OF_DOCUMENT_TOKEN_TO_BE_REPLACED

This feature require that you enable JavaScript in your browser.
END_OF_DOCUMENT_TOKEN_TO_BE_REPLACED

This feature require that you enable JavaScript in your browser.
END_OF_DOCUMENT_TOKEN_TO_BE_REPLACED