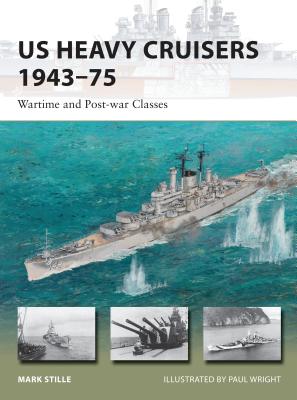 This is book number 214 in the New Vanguard series.

US Heavy Cruisers provides a detailed, illustrated look at the wartime and post-war-built heavy cruiser classes of the US Navy of World War II.

Fast and heavily armed, the Baltimore class was an evolution of the heavy cruiser designs from before World War II, but without the limitations imposed by the Washington Naval Treaty. Versatile vessels, the heavy cruisers of the Baltimore class, and their successors in the Oregon City and Des Moines classes, commonly acted as carrier escorts throughout World War II, but also performed bombardment duties in support of amphibious landings. Post-World War II, the heavy cruisers continued to see service, chiefly in Korea and Vietnam. Even after the heyday of the heavy cruiser had passed, the ships continued to serve - several were converted into the earliest examples of guided missile cruisers, and established an enduring legacy in the US Navy.

". . . make[s] an excellent addition to any bookshelf." - Northern Mariner

This feature require that you enable JavaScript in your browser.
END_OF_DOCUMENT_TOKEN_TO_BE_REPLACED

This feature require that you enable JavaScript in your browser.
END_OF_DOCUMENT_TOKEN_TO_BE_REPLACED

This feature require that you enable JavaScript in your browser.
END_OF_DOCUMENT_TOKEN_TO_BE_REPLACED