Henry of Lancaster's Expedition to Aquitaine, 1345-1346: Military Service and Professionalism in the Hundred Years War (Warfare in History #42) (Paperback) 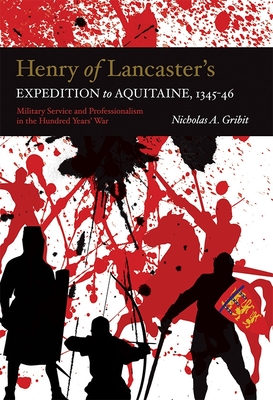 First full-length study of the campaigns led by Henry of Lancaster in Aquitaine, including a detailed biographical study of the individuals involved. In 1345 Henry of Lancaster, earl of Derby - the most prominent soldier, diplomat and statesman of his generation - led an English royal army to the duchy of Aquitaine and inflicted two devastating defeats on the French royal forces, at Bergerac and then Auberoche. These were the first decisive victories for either side, and swung the course of the Hundred Years' War dramatically in England's favour. The remarkable success of the expedition, however, has been overshadowed in history by Edward III's more celebrated victory at Cr cy the following year.
This reassessment of a neglected campaign draws on a wealth of original source material to furnish an examination of the campaign in the round; recruitment, preparations and financial administration, as well as its events and achievements, are examined closely. A detailed biographical study of the individuals who took up arms under Lancaster's command forms a main part of this work: the portrayal of hundreds of careers in arms allows us to glean a sense of what life was like for soldiers in this army and in the later Middle Ages in general. An investigation of the men's martial experience, motivations for service and personal military networks provides an understanding of how and, indeed, why the army was so effective in the field of war. It also reveals much about the emergence of professionalism in English medieval armies and offers a reassessment of Lancaster's importance as a captain, administrator and diplomat, and above all, as a successful military commander.

This feature require that you enable JavaScript in your browser.
END_OF_DOCUMENT_TOKEN_TO_BE_REPLACED

This feature require that you enable JavaScript in your browser.
END_OF_DOCUMENT_TOKEN_TO_BE_REPLACED

This feature require that you enable JavaScript in your browser.
END_OF_DOCUMENT_TOKEN_TO_BE_REPLACED