Sir Charles Oman's History of the Peninsular War Volume VI: September 1, 1812 - August 5, 1813 The Siege of Burgos, the Retreat from Burgos, the Campa (Hardcover) 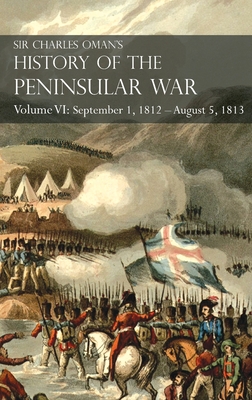 The Siege of Burgos, the Retreat from Burgos, the Campaign of Vittoria, the Battles of the Pyrenees

Between the Autumn of 1812 and the late Summer of 1813 campaigning in the Peninsula took on anew aspect. From being a defence of Portugal and those parts of Spain not under French control, it became an effort by the British, Spanish and Portuguese forces aimed at driving the French out completely. Operations at the end of 1812 include the unsuccessful British siege of Burgos and the subsequent retreat; renewed campaigning on the east coast of Spain, including Murray's actions around Tarragona; and the beginning of the final offensive against the French, including the battles of Roncesvalles, Maya and Sorauren.

This feature require that you enable JavaScript in your browser.
END_OF_DOCUMENT_TOKEN_TO_BE_REPLACED

This feature require that you enable JavaScript in your browser.
END_OF_DOCUMENT_TOKEN_TO_BE_REPLACED

This feature require that you enable JavaScript in your browser.
END_OF_DOCUMENT_TOKEN_TO_BE_REPLACED