Celer Et Audax: A Sketch of the Services of the Fifth Battalion Sixtieth Regiment (Rifles) During the Twenty Years of its Existence (Paperback) 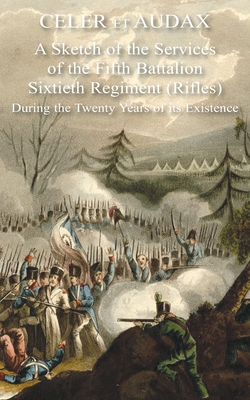 By Gibbes Rigaud
$28.00
usually available in 5-10 days
(This is a special order book which cannot be returned.)

The Fifth Battalion lasted from 1797-1818. It served with distinction through the whole of the Peninsular War from Roleia to Toulouse.

During the Napoleonic Wars, the King's Royal Rifle Corps saw action in the Peninsular War. The first four battalions had been raised as regular line battalions, but in 1797 a 5th battalion had been raised on Barbados, with additional companies formed on the Isle of Wight, and equipped entirely with rifles.

The troops of the Fifth Battalion were so effective that Sir Arthur Wellesley recommended their use to the divisional commanders describing them as the "most useful, active and brave troops in the field".

This feature require that you enable JavaScript in your browser.
END_OF_DOCUMENT_TOKEN_TO_BE_REPLACED

This feature require that you enable JavaScript in your browser.
END_OF_DOCUMENT_TOKEN_TO_BE_REPLACED

This feature require that you enable JavaScript in your browser.
END_OF_DOCUMENT_TOKEN_TO_BE_REPLACED