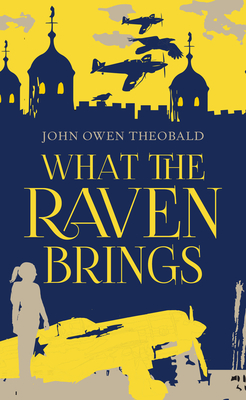 This is book number 2 in the Ravenmaster Trilogy series.

London, 1942: the Blitz is over but the war rages on. With the country still fighting for its existence, a young girl takes to the skies. After her mother was killed in an air raid, Anna Cooper was sent to live with her uncle, the Ravenmaster at the Tower of London. Now, he too is dead. His dying wish was for Anna to be the next Ravenmaster, keeper of the birds who, according to legend, guard the fate of the kingdom. But the Tower authorities won't stand for a female Ravenmaster, let alone one so young. Denied her destiny, Anna is desperate to escape the Tower and she bluffs her way into the glamorous—and dangerous—world of the Women's Auxiliary Air Force. But no matter how high she flies, Anna can't escape her past—nor the secret that it conceals. A secret that could change the course of the war.

John Owen Theobald was born in Eastern Canada, moved to the UK to study the poetry of Keats, and in 2009 received a PhD from the University of St Andrews. As a screenwriter, John has written several short films. His first feature screenplay, Chosen, received an Honourable Mention in the UK Film Festival and was an Official Finalist at the World Series of Screenwriting, Los Angeles.

This feature require that you enable JavaScript in your browser.
END_OF_DOCUMENT_TOKEN_TO_BE_REPLACED

This feature require that you enable JavaScript in your browser.
END_OF_DOCUMENT_TOKEN_TO_BE_REPLACED

This feature require that you enable JavaScript in your browser.
END_OF_DOCUMENT_TOKEN_TO_BE_REPLACED