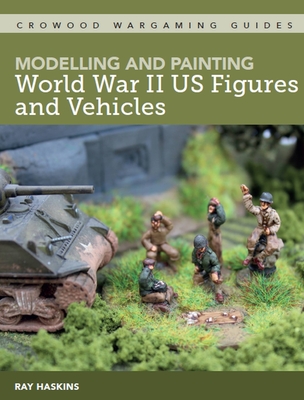 Modelling and Painting WWII US Figures and Vehicles covers the modelling and painting of US armed forces in the Pacific, on D-Day and during the liberation of Europe in 1/35, 1/56, 1/72 and 1/76 scales. Historical overviews set the scene, followed by detailed step-by-step modelling and painting guides for the creation of accurate and realistic models, whether for display or wargaming.

Ray Haskins received his first model Airfix kit when he was five years old and this sparked not only a life-long hobby, but also his career, in modelling and painting figures and vehicles.  His company is Ray Haskins Figure Painting.

This feature require that you enable JavaScript in your browser.
END_OF_DOCUMENT_TOKEN_TO_BE_REPLACED

This feature require that you enable JavaScript in your browser.
END_OF_DOCUMENT_TOKEN_TO_BE_REPLACED

This feature require that you enable JavaScript in your browser.
END_OF_DOCUMENT_TOKEN_TO_BE_REPLACED