Changes in the Air: Hurricanes in New Orleans from 1718 to the Present (Environment in History: International Perspectives #15) (Hardcover) 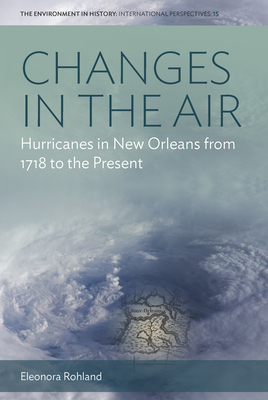 Hurricanes have been a constant in the history of New Orleans. Since before its settlement as a French colony in the eighteenth century, the land entwined between Lake Pontchartrain and the Mississippi River has been lashed by powerful Gulf storms that have wrought immeasurable loss and devastation, prompting near-constant reinvention and ingenuity on the part of its inhabitants. Changes in the Air offers a rich and exhaustively researched history of how hurricanes have shaped and reshaped New Orleans from the colonial era to the present day, focusing on how its residents have continually adapted to a uniquely unpredictable and destructive environment across more than three centuries.

Eleonora Rohland holds a doctorate from the Ruhr-University Bochum. She is full Professor at Bielefeld University and the author of Entangled History and the Environment? Socio-Environmental Transformations in the Caribbean, 1492-1800 (WVT/ University of New Orleans Press, 2021) and of Sharing the Risk: Fire, Climate, and Disaster--Swiss Re 1864-1906 (Crucible Books, 2011).

This feature require that you enable JavaScript in your browser.
END_OF_DOCUMENT_TOKEN_TO_BE_REPLACED

This feature require that you enable JavaScript in your browser.
END_OF_DOCUMENT_TOKEN_TO_BE_REPLACED

This feature require that you enable JavaScript in your browser.
END_OF_DOCUMENT_TOKEN_TO_BE_REPLACED