Henry David Thoreau - A Week on the Concord and Merrimack Rivers: "rather Than Love, Than Money, Than Fame, Give Me Truth." (Paperback) 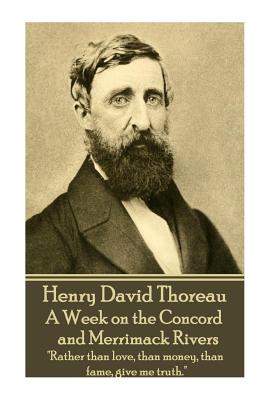 By Henry David Thoreau
$12.99
usually available in 3-7 days
(This is a special order book which cannot be returned.)

Henry David Thoreau was born on July 12th, 1817 on Virginia Road in Concord, Massachusetts. Thoreau studied at Harvard between 1833 and 1837 taking classes in rhetoric, classics, philosophy, mathematics, and science. On graduating the normal professions left him unmoved and, after a period teaching at his own school, a growing friendship with Ralph Waldo Emerson moved his career onto that of writer and observer of nature. Thoreau was a philosopher of nature and how it affected the human condition. He was deeply influenced by Nature and especially the Walden woods. Eventually his published writings were to celebrate this area and his own philosophies. A noted Abolitionist Thoreau was a man to stand by his principles regardless of the minority view he might be holding. Tragically his life and career were short. In 1859, following a late-night excursion to count the rings of tree stumps during a rain storm, he fell ill with bronchitis. His health now fell into an irreversible decline with only short periods of remission. Thoreau spent his last years revising and editing his unpublished works. In the decades that followed he would be regarded as one of America's greatest writers. Henry David Thoreau died on May 6th, 1862 at the tragically early age of just 44.

This feature require that you enable JavaScript in your browser.
END_OF_DOCUMENT_TOKEN_TO_BE_REPLACED

This feature require that you enable JavaScript in your browser.
END_OF_DOCUMENT_TOKEN_TO_BE_REPLACED

This feature require that you enable JavaScript in your browser.
END_OF_DOCUMENT_TOKEN_TO_BE_REPLACED