Back to Black: Black Radicalism for the 21st Century (Paperback) 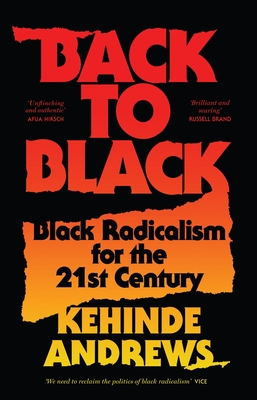 The Black Lives Matter movement reinvigorated Black political movements around the globe. People who never thought of themselves as activists are on the march, while groups that struggled to be heard are finding themselves with a megaphone and an audience. But with this renewed energy also comes renewed questions: How far have we really come? And what’s the best way to keep moving forward?

In Back to Black, Kehinde Andrews argues that racism is inexorably embedded in the fabric of society, and that it can never be overcome unless by enacting change outside of this suffocating system. The book traces the long and eminent history of Black radical politics. It is an appeal to reclaim Black radicalism, a movement that has been diluted and moderated over time, willfully misrepresented and caricatured by others, and divested of its potency and potential for global change. Through chapters that center on topics such as cultural nationalism, black Marxism, and black survival, and including Black feminist and LGBTQ perspectives, Andrews explores the true roots of this tradition. He shows how its rich past encompasses figures such as Marcus Garvey, Angela Davis, and the Black Panthers, and then connects the dots to today’s struggles by showing what the politics of Black radicalism might look like in the twenty-first century.

Andrews maintains there is hope that revolutionary change is possible. But he warns there can be no hesitation or excuses: “It’s already too late to be standing on the side-lines waiting to see whether you should commit.” Back to Black is the definitive book on the roots and evolution of Black radicalism. It is a radiant call-to-action from one of the world’s most daring Black political voices.

Kehinde Andrews is associate professor in sociology at Birmingham City University. He is also the chair of the Black Studies Association and of the Organisation of Black Unity. He writes for the Guardian and the Independent.

This feature require that you enable JavaScript in your browser.
END_OF_DOCUMENT_TOKEN_TO_BE_REPLACED

This feature require that you enable JavaScript in your browser.
END_OF_DOCUMENT_TOKEN_TO_BE_REPLACED

This feature require that you enable JavaScript in your browser.
END_OF_DOCUMENT_TOKEN_TO_BE_REPLACED