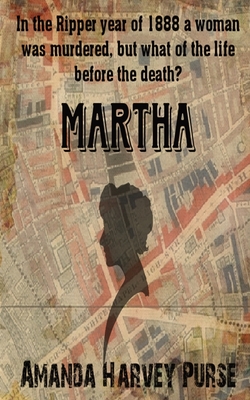 By Amanda Harvey Purse
Email or call for price.
usually available in 3-7 days
(This is a special order book which cannot be returned.)

In the August of 1888, Martha Tabram, sadly passed away in an alleyway within Whitechapel, London. This has led her to be one of the first suggested Jack the Ripper victims. However, as much as there are arguments for and against this statement, a question still arises, was that all, that Martha Tabram was?
2018, was the 130th anniversary of Martha's death and as much as we should remember the ladies that had passed away in the 'autumn of terror' of 1888, to remember the anniversary of someone's death is not a positive thing. However, what if we can scratch that, reverse it and flip that idea, on it's head?
What if we can celebrate the 150th anniversary of Martha's wedding day?
What if we could celebrate the 170th anniversary of Martha's birth?
Wouldn't that be more positive?
Luckily enough, 2019 gives us both of these anniversary's, so let's do something different, let's work together within this book to get to know Martha a little more.
Also within this book: The life stories of the policemen, the doctor, the coroner, the photographer and the witnesses involved in this Victorian investigation will be discussed.
Martha is a part of the factual series about the lives of the people involved in the Jack the Ripper case case by the same author: Jack and Old Jewry: The City of London Policemen who Hunted the Ripper, the award-winning Inspector Reid: The Real Ripper Street and The Cutbush Connections: In Flowers In Blood and in the Ripper case.
Amanda Harvey Purse is an historical researcher for the City of London Police Museum, a member of the Metropolitan Police Heritage Society, a historial writer for websites and magazines. She has been a historical researcher for television programmes on subjects such as: Henry Tudor, Richard III, The Great Fire of London, Queen Victoria, other historical murder cases, policing and the Jack the Ripper case.

This feature require that you enable JavaScript in your browser.
END_OF_DOCUMENT_TOKEN_TO_BE_REPLACED

This feature require that you enable JavaScript in your browser.
END_OF_DOCUMENT_TOKEN_TO_BE_REPLACED

This feature require that you enable JavaScript in your browser.
END_OF_DOCUMENT_TOKEN_TO_BE_REPLACED