Our Bloc: How We Win (Paperback) 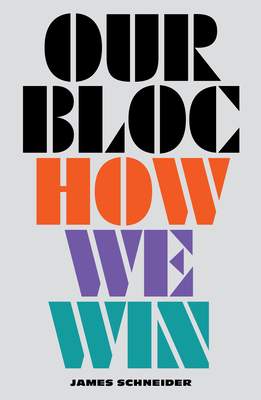 A plan to win for the British left, from the co-founder of Momentum

Our Bloc is a blueprint for a new combination of left-wing forces in Britain. James Schneider proposes a movement-party organisation that acts in society and in the Labour Party, through which party members, social movements, trade unions and socialist-inclined MPs could coordinate their political work. He adapts Chantal Mouffe’s theory of left populism to set out how the bloc could popularise socialist ideas and bend the parameters of politics towards its demands.

Socialist perspectives are now rarely heard in mainstream public debate, after five years under Jeremy Corbyn when the left had some success in shaping political discourse. There is a large base of potential activists and an even larger section of the population available for mobilisation, but no central force to unite and organise them.

Calls to ‘stay and fight’ against Keir Starmer’s failing leadership of the Labour Party are inadequate: socialists need a platform from which to do it. Schneider presents his Left Bloc as a pole of attraction for everyone seeking fundamental economic, social, political and environmental change. In this incisive book he sets out a plan for the next ten years: to build power, weaken our opponents and prepare ourselves for the next surge.

James Schneider co-founded Momentum in 2015 and went on to serve as Jeremy Corbyn’s spokesperson and head of strategic communications. He is communications director for Progressive International and a regular voice in the UK media.

“Our Bloc offers a powerful case for action. When movements come together, we change the world.”
—Jeremy Corbyn

“Inspirational. Our Bloc lifts the strategic debate. We need it.”
—Hilary Wainwright, co-editor of Red Pepper

“A razor-sharp intervention by one of the smartest strategists on the left.”
—Richard Seymour, author of Corbyn

This feature require that you enable JavaScript in your browser.
END_OF_DOCUMENT_TOKEN_TO_BE_REPLACED

This feature require that you enable JavaScript in your browser.
END_OF_DOCUMENT_TOKEN_TO_BE_REPLACED

This feature require that you enable JavaScript in your browser.
END_OF_DOCUMENT_TOKEN_TO_BE_REPLACED