TBD Devastator Units of the US Navy (Combat Aircraft) (Paperback) 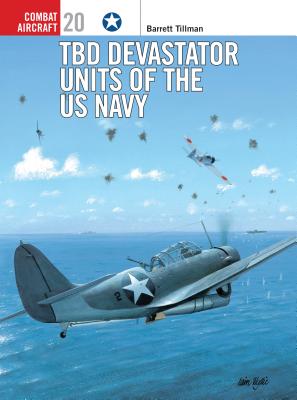 This is book number 20 in the Combat Aircraft series.

Osprey's title examining the TBD Devastator Units' short-lived participation in World War II (1939-1945). The first monoplane aircraft ordered by the US Navy for carrier operations, the Douglas TBD Devastator was designed to fulfil a requirement for a new torpedo bomber. Just 129 were built, and when it entered service it was the most modern aircraft of its type anywhere in the world. Its only real taste of action came on 4 June 1942 in the pivotal Battle of Midway, when 35 were shot down in a clash with Japanese A6M Zero fighters. The aircraft was replaced by the Grumman Avenger weeks later.

Barrett Tillman is a professional author and speaker with more than 40 nonfiction books as well as novels to his credit. His first book, published in 1976, remains in print today as do most of his subsequent titles.
He holds seven awards for history and literature including the 1996 Tailhook Association Lifetime Achievement Award and third place in the US Naval Institute Prize in 2009. Tillman has appeared in more than a dozen documentaries including The History Channel's Dogfights.

This feature require that you enable JavaScript in your browser.
END_OF_DOCUMENT_TOKEN_TO_BE_REPLACED

This feature require that you enable JavaScript in your browser.
END_OF_DOCUMENT_TOKEN_TO_BE_REPLACED

This feature require that you enable JavaScript in your browser.
END_OF_DOCUMENT_TOKEN_TO_BE_REPLACED