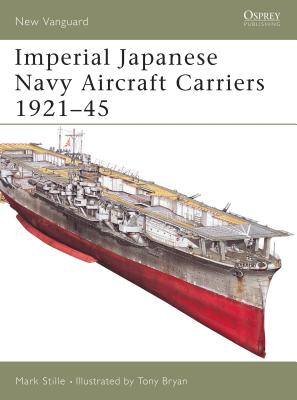 This is book number 109 in the New Vanguard series.

The Imperial Japanese Navy was a pioneer in naval aviation, having commissioned the world's first built-from-the-keel-up carrier, the Hosho. Throughout the 1920s and 1930s, it experimented with its carriers, perfecting their design and construction. As a result, by the time Japan entered World War II and attacked the United States at Pearl Harbor in 1941, it possessed a fantastically effective naval aviation force. This book covers the design, development and operation of IJN aircraft carriers built prior to and during World War II. Pearl Harbor, Midway and the first carrier vs carrier battle, the battle of the Coral Sea, are all discussed.

“Though it only has 48 pages, the book works well with what is has as it provides some impressive information about all of the carriers (some of it, which may impress those that have researched about the subject matter for a long time). This book is mainly for historians (mainly as a starting point for those wanting to learn more about the subject matter), collectors and modelers.” —Andrew Nguyen, www.combinedfleet.com (July 2009)

This feature require that you enable JavaScript in your browser.
END_OF_DOCUMENT_TOKEN_TO_BE_REPLACED

This feature require that you enable JavaScript in your browser.
END_OF_DOCUMENT_TOKEN_TO_BE_REPLACED

This feature require that you enable JavaScript in your browser.
END_OF_DOCUMENT_TOKEN_TO_BE_REPLACED