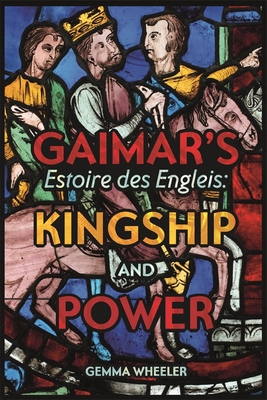 Geffrei Gaimar's Estoire des Engleis is its author's sole surviving work. His translation and adaptation of the Anglo-Saxon Chronicle, expanded with a number of lengthy interpolations which appear to draw upon oral traditions and other, unknown written sources, is all that remains of an ambitious history which once reached back as far as Jason and the Golden Fleece. However, the extent of Gaimar's achievement - as poet, historian, and translator - has been obscured by a tendency among scholars to dismiss him as a writer of romance masquerading as history, his work riddled with guesswork, errors, and outright fabrications.
This volume aims to challenge such views of Gaimar by providing the first holistic study of his Estoire's incisive commentary upon kingship: its virtues, vices and conflicting models, as applied to rulers such as Edgar "the Peaceable", Cnut, and the ill-fated William Rufus. One good king, for Gaimar, is much like another. A bad king, by contrast, is vividly characterised as ineffectual, tyrannical, or both. Gaimar, a product of that extraordinary period in medieval English culture often termed the "twelfth-century Renaissance'" blends history with literary tropes to yield a sophisticated account of the invasions, betrayals, and familial conflicts that shaped his England's history.

This feature require that you enable JavaScript in your browser.
END_OF_DOCUMENT_TOKEN_TO_BE_REPLACED

This feature require that you enable JavaScript in your browser.
END_OF_DOCUMENT_TOKEN_TO_BE_REPLACED

This feature require that you enable JavaScript in your browser.
END_OF_DOCUMENT_TOKEN_TO_BE_REPLACED