She Devils: True Stories of the World's Most Notorious Female Serial Killers (Paperback) 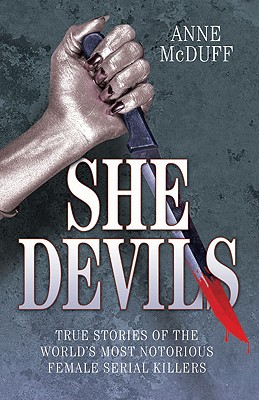 Very few women kill. When they do, it is often the tragic outcome of domestic abuse, drug addiction, or mental illness. It is rare for women to kill for pleasure, yet a few of that breed emerge in each generation. At the turn of the last century, with no adoption agencies to protect them, Annie Walters killed unwanted newborns. Ninety years later, Aileen Wuornos sold herself on the highways of Florida, a well-known hunting ground for men looking for prostitutes, until she became the hunter. Rose West exploited lonely girls from nearby children's homes, and Myra Hindley took sickening advantage of the blind trust of Britain in the 1960s where children were safe to walk the streets alone. Beverley Allit and Marybeth Tinning thought that, as a nurse and a mother, the deaths of the children in their care would be seen as tragic accidents. And Karla Homolka exploited a different prejudice. She was prefect, pretty, and so caring as a veterinary nurse. No one ever imagined she could be a sexual predator and killer.

This feature require that you enable JavaScript in your browser.
END_OF_DOCUMENT_TOKEN_TO_BE_REPLACED

This feature require that you enable JavaScript in your browser.
END_OF_DOCUMENT_TOKEN_TO_BE_REPLACED

This feature require that you enable JavaScript in your browser.
END_OF_DOCUMENT_TOKEN_TO_BE_REPLACED