The Situationists and the City: A Reader (Paperback) 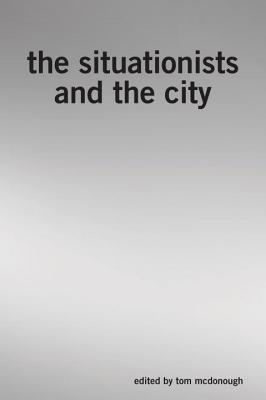 The Situationist International (SI), led by the revolutionary Guy Debord, were active throughout the 1950s and 60s. They published the journal Internationale Situationniste that included many incendiary texts on politics and art, and were a galvanizing force in the revolutions of May 1968. The importance of their work has been felt particularly in their revolutionary analysis of cities. The SI were responsible for utopian imaginings of the city, where its alienating effects from its routine use as a site of consumption and work were banished and it was instead to be turned into a place of play. Tom McDonough collects all the SI’s key work in this area for an essential one-stop collection. Including such essential works as ‘The Theory of the Derive’, ‘Formulary for a New Urbanism’, and many previously untranslated texts, the book will also be strikingly illustrated by the images that were core to the Situationist project.

Thomas McDonough is Associate Professor of Modern Architecture and Urbanism in the Art History department at Binghamton University, and an editor of Grey Room. He is the editor of Guy Debord and the Situationist International and the author of The Beautiful Language of My Century.

“A highly readable and well-organised compendium that is likely to be fingered for some time, it lays out neatly the movement’s visionary take on the city (read Paris) ‘as the primary site of alienation in modern society.’”—Art Review

“Gives us a flavour of this important intellectual moment.”—Blueprint

This feature require that you enable JavaScript in your browser.
END_OF_DOCUMENT_TOKEN_TO_BE_REPLACED

This feature require that you enable JavaScript in your browser.
END_OF_DOCUMENT_TOKEN_TO_BE_REPLACED

This feature require that you enable JavaScript in your browser.
END_OF_DOCUMENT_TOKEN_TO_BE_REPLACED