The Role of US Diplomacy in the Lead-Up to the Six Day War: Balancing Moral Commitments and National Interests (Hardcover) 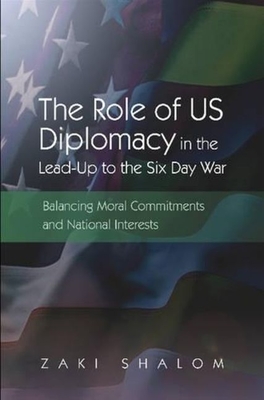 By Zaki Shalom
Email or call for price.

The outbreak of the Six Day War was primarily the outcome of tense relations between Israel and Syria during the period that preceded the war. Aware of Israel's overall military superiority, the radical Syrian regime believed that the only way to defeat the "Zionist entity" was by guerrilla warfare, termed "the people's war." The Syrian aim was to keep up continuous limited military strikes against Israel, which they determined would bring about a gradual weakening of the Jewish state's military power and political stability, eventually forcing Israel to acquiesce to Arab demands. Israel, with the unwavering backing of the United States, retaliated fiercely against the Syrian provocations - the clear policy orientation was the regime's demise. Egypt, presenting itself as the leader of the Arab world, could not remain unresponsive towards this escalating military tension and ignore Syria's political distress. President Nasser therefore decided to send troops into Sinai, followed by a blockade of the Straits of Tiran. Israel now felt its survival was under threat. Attempts to solve the crisis by diplomatic means failed, and, on June 5, Israel launched a bold strike against Egypt and Syria. The Six Day War not only changed the borders of Israel and redefined its relations with the Arab world, but the impact on the international community still reverberates 40 years on. Despite a plethora of books on the war, analysis of the intense US-Israel/US-Egypt political and diplomatic activity in the period preceding the war has not been forthcoming to date. Author Zaki Shalom addresses this lacuna by detailing the meetings, exchanges of messages, and internal discussions right up to the outbreak of the war. The book will be essential reading for all those involved in Middle East studies, international relations, and diplomacy and statecraft. "One of the book's strong contributions is the treatment of individual Israeli and American players in the drama..." Recommended. Choice, November 2012, Vol. 50 No. 03

“The literature on the Six-Day War in June 1967 is extensive, and it is difficult to believe that much is left to tell about the Israeli side of the conflict beyond Michael Oren’s Six Days of War (2003), but Shalom (senior researcher, Ben-Gurion Research Institute, Ben-Gurion Univ.) provides a brief, well-crafted account of the immediate time period leading to the war with emphasis on Israeli–US diplomatic manoeuvring. He does not break new ground in archival study as most of the sources are accessible records, but he does provide a solid, readable account. He emphasizes Syria’s role as the primary instigator that drew Egypt into the fray. One of the book’s strong contributions is the treatment of individual Israeli and American players in the drama; Israeli premier diplomat Abba Eban emerges as the wrong man to have attempted to manage US response in this crisis. Although the book provides extensive historical context for the crises, when it gets to the immediate outbreak of the war, the volume curiously ends abruptly. The reader is left hanging at the point where the story of US–Israeli diplomatic actions had really just begun. Recommended.”  —Choice

This feature require that you enable JavaScript in your browser.
END_OF_DOCUMENT_TOKEN_TO_BE_REPLACED

This feature require that you enable JavaScript in your browser.
END_OF_DOCUMENT_TOKEN_TO_BE_REPLACED

This feature require that you enable JavaScript in your browser.
END_OF_DOCUMENT_TOKEN_TO_BE_REPLACED