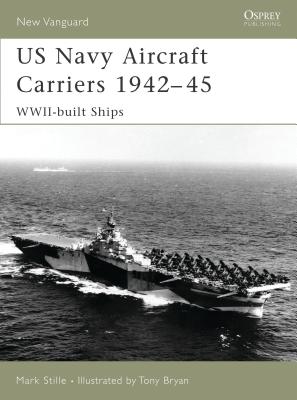 This is book number 130 in the New Vanguard series.

Dominating the seas during World War II, the US aircraft carrier played a crucial role in every major naval combat of the war.

Development of the Essex class began in 1941, and was the largest class of carrier ever built. During the Pacific War it formed the backbone of any fighting force and became renowned for its mighty 'Sunday Punch' - the impressive offensive power of 36 fighter planes, 36 dive bombers, and 18 torpedo planes.

The Independence class was a lighter and faster carrier, built after Pearl Harbor, to bring more ships into action as quickly as possible. Alongside the Essex class their crews saw a dramatic change in tactical deployment as they began to form the fast carrier task forces that were so effective in Pacific operations.

Featuring an annotated cutaway and artwork detailing both the interior and exterior features of the ships, this book explores the design, development, and deployment of both the Essex and Independence class of light carriers. This sequel to US Navy Aircraft Carriers 1922-45: Prewar classes (New Vanguard 114), provides a detailed exploration of the carriers that were at the forefront of many actions in World War II, including the climatic battles of Phillipine Sea and Leyte Gulf in 1944.

“The book does its job well in describing the Essex and Independence class carriers. There are also many photographs and paintings of the carriers while either on a regular cruise or in combat actions. In all, a good book from Osprey to read for those interested in US carriers and their operations.” —Andrew Nguyen, ww2db.com (October 2009)

“The superlative images in the book are further enhanced by the artwork of Tony Bryan... this is a book that ship fans will just have to have in their libraries and the rest of us will find it an excellent primer on the types.” —Scott Van Aken, modelingmadness.com

This feature require that you enable JavaScript in your browser.
END_OF_DOCUMENT_TOKEN_TO_BE_REPLACED

This feature require that you enable JavaScript in your browser.
END_OF_DOCUMENT_TOKEN_TO_BE_REPLACED

This feature require that you enable JavaScript in your browser.
END_OF_DOCUMENT_TOKEN_TO_BE_REPLACED